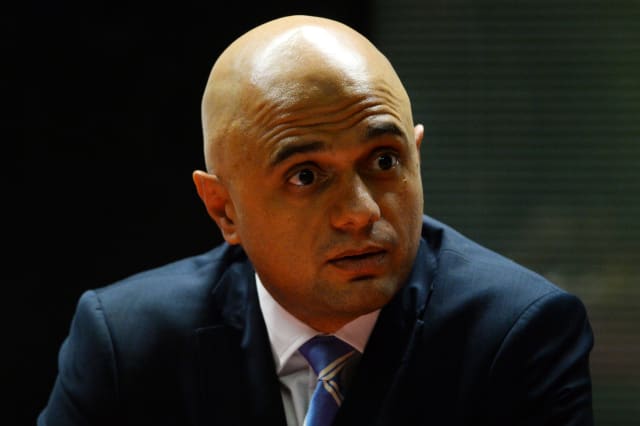 Home Secretary Sajid Javid has announced a cash boost for police that could total nearly £1 billion.

Council taxpayers will fund more than half of the potential £970 million rise, which the Government said would represent the largest overall increase since 2010.

The announcement drew an immediate backlash, with one rank-and-file leader describing it as a “sticking plaster solution”.

Unveiling the provisional funding settlement of up to £14 billion for 2019/20, Mr Javid said demand pressures on police had risen this year as a result of “changing crime”.

He said: “Since becoming Home Secretary I have been clear I would prioritise police funding, and today I have delivered on that promise.

“Taken together, this substantial increase in police funding will enable forces to continue recruiting, fill crucial capability gaps such as in detectives, meet their genuine financial pressures, drive through efficiency programmes, and improve their effectiveness by preventing crime and delivering better outcomes for victims of crime.”

While most police force funding comes directly from central government, around 30% is drawn from council tax through the policing precept levy.

Under the provisional settlement announced on Thursday, police and crime commissioners have been given the green light to ask for an additional £2 a month per band D household.

If all PCCs take up the option, this would generate around £510 million in additonal funding, the Home Office said.

The rest of the proposed year-on-year increase is comprised of a £59 million rise in counter-terrorism funding, a £161 million increase in general government grants, £153 million to help meet increased pension costs, and £90 million earmarked for capabilities to tackle serious and organised crime.

National Police Chiefs’ Council lead for finance Chief Constable Dave Thompson said: “The Government is right to recognise the serious pressures on policing mean we could not wait for a full spending review and further funding is needed now.

“The additional funding through the police grant will help forces meet the costs of government pension changes and should allow chief constables and police and crime commissioners to avoid making further cuts.

“Increased flexibility through the council tax precept will give chief constables and police and crime commissioners the opportunity to address local issues – with many focusing on violent crime.”

Paddy Tipping, deputy finance lead for the Association of Police and Crime Commissioners, said: “Whilst this additional funding is welcome there are still significant challenges for policing.

“It needs to be acknowledged that, because of the different levels of precept and share of budget accounted for by council tax, the level to which forces benefit will vary.”

Shadow policing minister Louise Haigh said: “The simple truth is that because the Home Secretary cannot make the case within government for extra resources for the police, he passed his own political failure onto local ratepayers.”

Police Federation of England and Wales national chairman John Apter said: “The truth is that this appears to be a quick fix. A sticking plaster solution that injects extra money in the short-term, but one which sees the burden falling unfairly on local council tax payers.”

Mayor of London Sadiq Khan said: “Londoners will be furious at the Government’s announcement today.

“The additional funding represents a tiny fraction of the huge government cuts to the Met Police since 2010 and will mean the number of police officers in London will continue to fall over the years ahead.”

Ministers have come under sustained pressure to provide a cash injection as forces attempt to tackle rising levels of serious violence, and knife crime in particular, as well as a severe terror threat.

Police funding has fallen by 19% in real terms since 2010. Over the same period, officer numbers have decreased by more than 20,000.

A slew of statistics and highly critical reports have prompted intense scrutiny of police performance and funding in recent weeks.

The number of arrests in England and Wales has halved in a decade and stop and search activity has sunk to the lowest level since current data collection started in 2001/02.