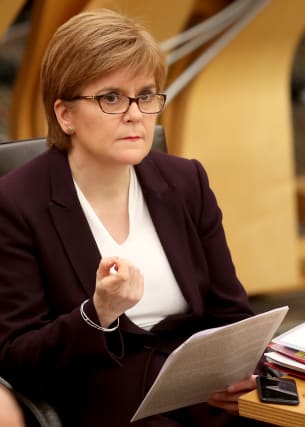 Nicola Sturgeon says she is “disappointed” the Scottish Government only found out about the planned closure of a rail maintenance depot through media reports.

It was reported on Tuesday that Gemini Rail Services proposed to close its site in Springburn, Glasgow, putting around 200 jobs at risk.

Ms Sturgeon said officials met Gemini bosses last week and were given no indication such an announcement would be made.

The company took over the depot from Knorr-Bremse Rail Services after a sale was agreed in August.

The issue was raised at First Minister’s Questions on Thursday by Bob Doris, MSP for Maryhill and Springburn.

The First Minister said: “The Scottish Government learned of this development only through the media and let me say, I am extremely disappointed that that is the case.

“Officials met with the new owners last week but no reference was made on any immediate plans to make such an announcement.

“The Scottish Government will continue to engage constructively with the owners in the interests of the staff effected and the overall Scottish economy.

“We are committed to supporting rail services and have made record investment in rail in recent years.”

Scottish Labour leader Richard Leonard and shadow Scotland minister Paul Sweeney plan to meet members of the Unite union at the depot on Friday to discuss how the future of the plant may be secured.

“This is a vital part of our industrial capacity in Scotland,” Mr Leonard said.

“It is inconceivable that Springburn’s connection with the railway industry might finally be broken.

“Scottish Labour stands shoulder-to-shoulder with these workers in the fight for their livelihoods.

“Our party was established to take on challenges like these and together we can win.”

Mr Sweeney said: “These works, which date back to 1856, are the last vestige of an industry that is the very reason Springburn exists today and was the centre of world locomotive manufacturing. It’s iconic.

“This is one of just three railway maintenance plants left in Scotland and is now a modernised centre of excellence.

“Its closure would be a hammer blow for our community, our city and our country.

“I will do everything I can and work tirelessly at all levels of government to save it.”

“It is very clear, as it has been for some time, that numbers of pre-privatisation rolling stock which have been the cornerstone of business for many years, are in severe decline.

“Due to the introduction of more modern vehicles, the number of pre-privatisation vehicles in service will reduce by 80% in the next five years.

“Furthermore, Springburn will continue to suffer an unsustainable decline in demand due to its location as only around 10% of the rolling stock that will be accessible is in Scotland and the north of England. As such, it is necessary to put forward the proposal.

“The decision to make this proposal has not been made lightly. We recognise the dedication and hard work of all staff at Springburn and know this will be an upsetting period for them and their families.”