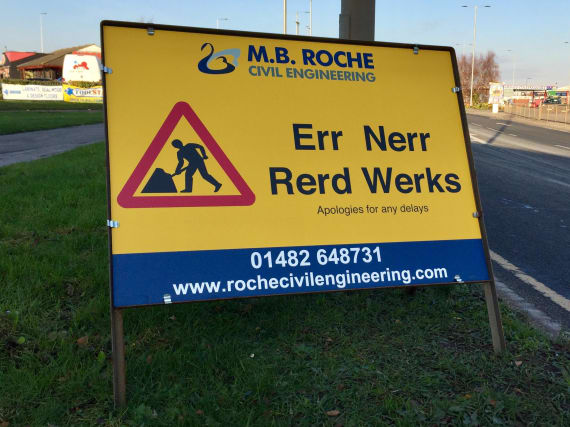 A roadworks sign in Hull written in the local Yorkshire dialect has proved a hit on social media.

“Well someone knows how we speak Ull in Hull,” wrote @mrhuggy, who shared a pic of the sign on Twitter.

“That’s cheered me up to day. Need to start a campaign for all signs to be in Ull.”

“Herp there’s nerr snerr as well,” wrote one Facebook user in reply to the picture.

“The most Hull sign I’ve ever read,” replied another.

Daniel Roche, director of the family-run local company which made the sign, told the Press Association he came up with the idea to have a little fun and promote the business.

“No one likes roadworks and if people are held up slightly and it puts a smile on their face then all the better,” he said.

Mr Roche said the feedback had been so positive the slogan may become a permanent fixture.

“We could put it on the vans and the hi-vis jackets, it could become our little catchphrase maybe,” he added.