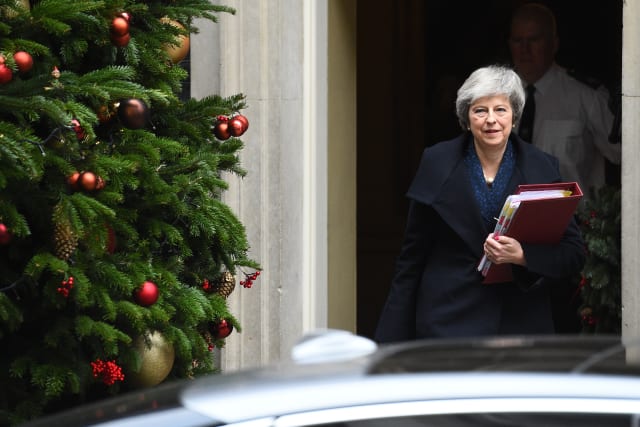 Theresa May was looking set to see off a challenge to her leadership of the Conservative Party, as scores of Tory MPs made public statements of support ahead of a confidence vote.

But questions were being asked in Westminster about how long she would stay on as Prime Minister if she wins, after a senior Downing Street source noted that MPs were not being asked to choose a leader to take them through the next general election.

Mrs May responded with defiance to the news that the threshold of 48 letters from Tory MPs demanding a confidence vote had been passed, declaring that she would fight for her job “with everything I’ve got”.

Every MP in her Cabinet swiftly issued statements of support and she was greeted by loud cheers from the Tory backbenches when she faced the House of Commons for her weekly session of Prime Minister’s Questions.

By early afternoon, the number of Conservative MPs saying publicly that they would vote for her had passed the 159 required for her to survive the attempt to oust her.

The target, representing half of the parliamentary party plus one, increased from 158 during the day, as the Conservative whip was restored to Burton MP Andrew Griffiths, a former chief of staff to Mrs May who had been suspended over suggestive text messages.

He immediately confirmed he would back the PM.

However, uncertainty remained over whether all of them would make good on their promises in the secret ballot taking place in a Commons committee room between 6pm and 8pm, and whether Mrs May would obtain a large enough majority to be secure in her position.

Downing Street sources declined to discuss whether the PM would stay on if she won by only a slender margin.

Failure in the ballot would trigger a leadership contest in which Mrs May could not stand.

But if she wins, another challenge cannot be mounted against her position as Tory leader for a year.

Mrs May was informed that she would face a ballot by the chairman of the backbench 1922 Committee, Sir Graham Brady, in a phone call at 10.35pm on Tuesday, shortly after she returned to 10 Downing Street from a day of travels which had taken her to The Hague, Berlin and Brussels for Brexit talks with EU leaders.

As day broke in Westminster on Wednesday, Sir Graham issued a press release announcing that the threshold had been reached and a confidence vote would be held later that day.

In a dramatic early morning statement outside the door to 10 Downing Street, Mrs May responded: “I will contest that vote with everything I’ve got.”

Warning that a change of prime minister would put the UK’s future at risk and could delay or halt Brexit, she insisted she would stay on to “finish the job”.

Mrs May said securing a Brexit deal which will deliver on the result of the 2016 referendum was “now within our grasp” and said she was “making progress” in securing reassurances from EU leaders on MPs’ concerns about the proposed backstop for the Irish border.

But she warned: “A change of leadership in the Conservative Party now would put our country’s future at risk and create uncertainty when we can least afford it.”

Mrs May said: “The new leader wouldn’t have time to renegotiate a withdrawal agreement and get the legislation through Parliament by March 29, so one of their first acts would have to be extending or rescinding Article 50, delaying or even stopping Brexit when people want us to get on with it…

“Weeks spent tearing ourselves apart would only create more division, just when we should be standing together to serve our country.

“None of that would be in the national interest.

“The only people whose interests would be served are Jeremy Corbyn and John McDonnell.”

Husband Philip showed his support by watching Prime Minister’s Questions from the public gallery, while Tory elder statesman Kenneth Clarke told MPs that a leadership contest would be “irresponsible and unhelpful”.

None of the PM’s Brexit-backing critics took the opportunity to attack her, while there were strong words of support from backbenchers including Neil O’Brien (Harborough), who condemned “headbangers from all sides” for undermining her.

But she faced a call to resign from the Scottish National Party’s leader in Westminster, Ian Blackford, who said: “This Government is a farce, the Tory Party is in chaos and the Prime Minister is a disgrace… Prime Minister, take responsibility, do the right thing, resign.”

Mrs May sidestepped the challenge, insisting a change of prime minister now would mean “delaying or stopping Brexit”.

Questions were raised over whether she was privately assuring colleagues she would step down once the Brexit process was over, after a senior Downing Street source told reporters that tonight’s vote was not about choosing a leader to take the party into the next election.

“This vote isn’t about who leads the party into the next election, it is about whether it makes sense to change leader at this point in the Brexit negotiation,” said the source.

He insisted he was “not aware” of Mrs May floating a departure date in conversations with Cabinet ministers and backbench MPs, and declined to discuss whether she would stay on if she won the ballot by a slender margin.

“She has said on a number of occasions, in fact she said immediately after the last election in 2017, that she would serve as long as her colleagues want her to,” he said.

Ministers touted as possible successors to the Prime Minister were among those voicing support for her.

Foreign Secretary Jeremy Hunt said Mrs May is “the best person to make sure we actually leave the EU on March 29”, while Home Secretary Sajid Javid said a leadership contest would be seen as “self-indulgent and wrong”.

But in a joint statement, Jacob Rees-Mogg, chairman of the European Research Group of Eurosceptic Tory backbenchers, and his deputy Steve Baker said: “Theresa May’s plan would bring down the Government if carried forward.

“But our party will rightly not tolerate it.

“Conservatives must now answer whether they wish to draw ever closer to an election under Mrs May’s leadership.

“In the national interest, she must go.”

Mrs May cleared the decks to lobby Tory MPs for their backing, cancelling a planned meeting of Cabinet and a trip to Dublin for talks with Irish premier Leo Varadkar.

She was due to address the 1922 Committee at 5pm, immediately before the crucial vote.

Labour Party chairman Ian Lavery said: “With only weeks left before Britain leaves the EU, Theresa May’s weakness and failure has completely immobilised the Government at this critical time for the country.

“The Prime Minister’s half-baked Brexit deal does not have the backing of her Cabinet, her party, Parliament or the country.