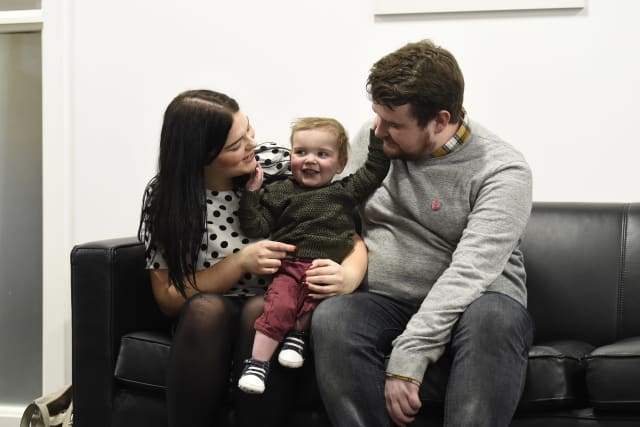 Families impacted by organ donation have urged people to discuss their wishes with relatives as new funds to promote the life-saving decision were announced.

The parents of a two-year-old boy awaiting a heart transplant joined with a mother whose late daughter’s organs were donated as they tried to raise awareness around the emotive issue.

They asked people to consider the facts and figures around becoming a donor as Stormont’s Department of Health unveiled a £250,000 recurrent fund aimed at promoting the organ donation message.

It was announced on Northern Ireland’s annual Organ Donation Discussion Day – an initiative to encourage people to take a moment to discuss their wishes with family and friends.

Belfast mother Annemarie Pryor, whose daughter Marie Therese died suddenly at the age of 23, told an event in the city that the decision to donate her organs had ensured a positive legacy from tragedy.

“It was one of hardest times of our lives as a family – but together, because of the decisions we made, it brought us closer together.

“It gave us a better outcome on life.”

West Belfast parents Mairtin Mac Gabhann and Seph Ni Mheallain, whose young son Daithi is currently on the waiting list for a heart transplant, have led a high-profile campaign to promote organ donation.

“We just want to raise a bit of awareness and to get people thinking about the question of organ donation – that the option is there to save lives,” said Ms Ni Mheallain.

Mr Mac Gabhann said his son was “such a happy child”.

“We have been told because of his heart condition that he should be very low on energy, but we have yet to see that energy running out,” he said.

“We would just call on all people and families to consider becoming organ donors because it can really make the whole difference to people like us and potentially give that gift of life – that’s something special.”

Chief Medical Officer for Northern Ireland Dr Michael McBride highlighted that in the last five years the number of people on the organ donation register increased from 30% to 45%.

He stressed that organ donation could only proceed with the consent of the families who have lost loved ones.

“One donor can help improve or save the lives of up to nine others,” he said.

“While Northern Ireland leads the world in live kidney donation and transplantation, around a third of families don’t give consent after the death of a loved one.

“In these difficult circumstances, recalling a conversation with their loved about their wishes in relation to organ donation can often make a family’s decision more comfortable.”

Co-founder of organ donation trust, the Opt for Life Foundation, Shane Finnegan, said: “Organ donation can only be a gift, freely given, from one family to another and that is why we want to ensure that people let their loved ones know what their wishes are on organ donation as the consent rate rises significantly when families have that all important conversation.”