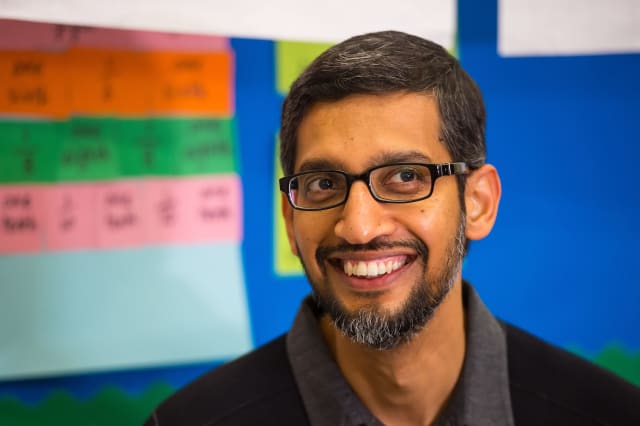 The company boss will be grilled by the US House Judiciary Committee in Washington DC, examining how it handles user data, amid increasing concern about the power of big tech firms.

Mr Pichai, who has been at the helm of Google for three years of his 15-year career with the company, will pledge support for privacy legislation and argue that Google operates without political bias.

“We have invested an enormous amount of work over the years to bring choice, transparency, and control to our users,” Mr Pichai said in a prepared statement released ahead of the hearing.

“These values are built into every product we make.

“We recognise the important role of governments, including this Committee, in setting rules for the development and use of technology. To that end, we support federal privacy legislation and proposed a legislative framework for privacy earlier this year.”

US lawmakers will probe the chief executive at a tough time for Google, just a day after it was revealed that its soon-to-close Google+ social media platform had suffered a fresh data leak, jeopardising personal data of 52.5 million users, including name, email address, occupation, and age.

Data collection will form a major part of proceedings, looking at Google’s dominant position and how it collects and uses people’s data across multiple services, including Google Search, YouTube, its Chrome web browser and the Android operating system.

US President Donald Trump has previously accused Google of providing “rigged” search results with negative news about himself and fellow Republicans.

“I lead this company without political bias and work to ensure that our products continue to operate that way,” Mr Pichai will say.

“To do otherwise would go against our core principles and our business interests. We are a company that provides platforms for diverse perspectives and opinions — and we have no shortage of them among our own employees.”

Facebook’s chief operating officer, Sheryl Sandberg, and Twitter chief executive Jack Dorsey attended the hearing, but an empty chair for Google was left after the committee rejected an offer to receive a lower-ranking executive instead.