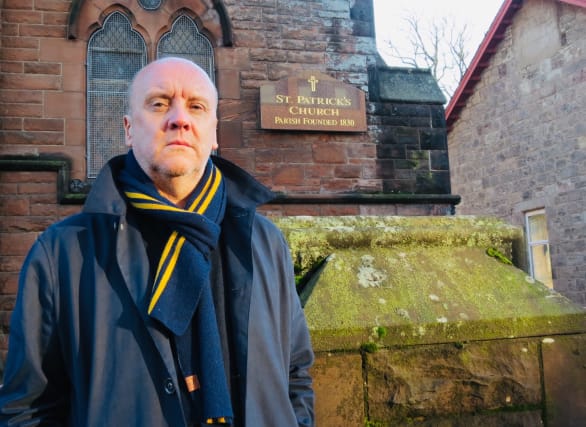 A former altar boy who claims he was repeatedly raped by a priest is suing the Catholic Church.

Jim Lawn, 54, said he was raped and beaten by Father John Gowansat St Patrick’s Church in Dumbarton in the 1970s.

He is pursuing a civil action against the Catholic Church in relation to alleged historic abuse by Father Gowans, who died in 1999.

The church has apologised to anyone who has suffered abuse and said lessons have been learned from the past.

Mr Lawn, who has waived his right to anonymity, said he was eight years old when the abuse began.

He said that, after Mass on weekdays, he was the only boy around and Father Gowans would lead him to the sacristy – a private room for preparing Mass – where he would be abused and beaten.

Mr Lawn said: “Father Gowans told me I’d burn in Hell if I refused him or spoke out.

“If telling the truth is worthy of Hell, then I wonder where he ended up?

“You never stop feeling like a victim and you never stop suffering – but if you talk to someone you at least don’t need to do it alone.”

Recalling the first attack, he said: “He (Gowans) took me into a toilet just off the corridor leading from the sacristy to the church.

“In a very short space of time it went from initial touching to a full attack.

“I was terrified and completely powerless to stop any of it.

“They nearly all happened like this and it happened nearly every week for two or three years.”

When Mr Lawn was 10, his father’s work took him to Saudi Arabia for a year and by the time the family returned Gowans had been moved to a diocese in Aberdeen.

Mr Lawn told his parents and GP about the alleged abuse in the early 2000s and filed a historic abuse complaint at Clydebank police station in 2011.

Kim Leslie, specialist abuse lawyer and partner at Digby Brown Solicitors, said: “We are pursuing a civil action against the Catholic Church in relation to historic abuse perpetrated by Father John Gowans.

“The passage of time, and indeed the passing of abusers, does not mean those who are responsible are absolved of responsibility for such horrendous actions.”

A Catholic Church spokesman said: “It is difficult to respond adequately to allegations of serious crimes dating back almost 50 years when legal proceedings are active and the alleged abuser is dead (Father John Gowans died in July 1999).

“The crimes described in these allegations are appalling. The Church, its bishops, priests and people are truly sorry for what has happened to all those who have suffered any kind of abuse.

“Archbishop Tartaglia has apologised repeatedly on behalf of the Church of today for the failures and crimes of the past. That apology is sincere and heartfelt and is extended to anyone who suffered at the hands of Father Gowans or any other representative of the Church.

“Lessons have been learned from the past. We cannot make up for the pain of survivors, but we are determined to ensure that young people today and tomorrow will be safe and secure in the care of the Church.”