A Labour MP "acted on the spur of the moment" when he picked up the ceremonial mace in protest at the Government's handling of Brexit.

Lloyd Russell-Moyle (Brighton Kemptown) said he was protesting because the Tories were riding "roughshod over the principle of parliamentary democracy" by pulling the "meaningful vote".

He was thrown out the House of Commons after he held the mace aloft and marched towards the Commons doors, where he was stopped by officials.

Speaking from the Red Lion pub just outside Parliament, the Labour MP said he was frustrated by the Government unilaterally deciding to ditch a vote using a solitary whip to order the vote to be postponed.

He said: "I thought, one person is shouting 'tomorrow' and literally hundreds of people are shouting 'today', and the will of Parliament is going to be ignored.

"The symbolic gesture of lifting the mace and removing it is that the will of Parliament to govern is no longer, it has been removed, and I felt Parliament had effectively given up its sovereign right to govern properly. 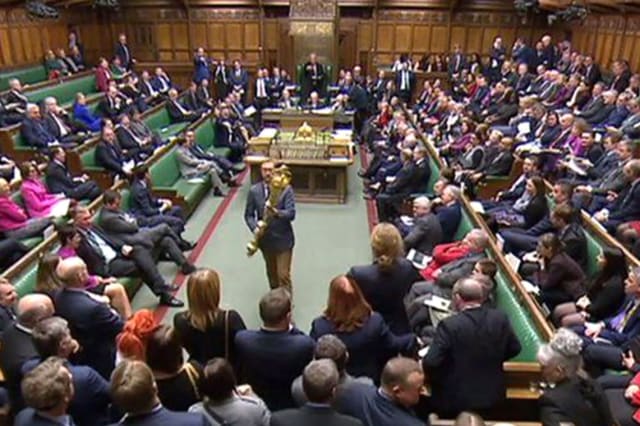 "If we don't sort out our constitutional settlement so that governments can't do this in the future we do need to keep lodging these protests."

Mr Russell-Moyle handed over the mace without incident but faced angry shouts from Tory MPs who cried "expel him" as Speaker John Bercow rose to his feet.

He said: "I was escorted out of Parliament by one of the men in tights who said 'all I would advise you, sir, is to try not to bring Parliament into disrepute again'.

"They were very nice about it but firm, 'you've got to leave now' – I was always willing to hand it over and my intention was to walk outside and hand it over.

"But they stopped me before I got out of the chamber and I wasn't going to struggle with someone wearing a huge sword on their hip."

Comparing the protest with chaining yourself to railings, Mr Russell-Moyle said the UK's unwritten constitution "relies on good faith on all sides" and that was "ebbing away" so he felt a minor rebellion was acceptable.

"What is the point of democracy if we cannot vote?" he said.

"I'm sure Jeremy Corbyn would probably have preferred me not to have done it but I'm sure he understands why I've done it.

"When I went to bow to leave the chamber I did notice John (McDonnell) usher me out, bearing in mind John was the last person to do that stunt."

Under parliamentary rules, Speaker John Bercow ordered Mr Russell-Moyle to leave the chamber for "the remainder of the day".

Mr Russell-Moyle initially refused the order and remained in the House before Mr Bercow said: "No, no he must leave or be escorted, he should leave" — at which he left.

The mace is the symbol of royal authority and without it neither the Commons or Lords can meet or pass laws.

Mr Russell-Moyle's actions came after Theresa May delayed the Brexit deal vote, something he vocally opposed in earlier exchanges.

The last time the mace was taken from its place was in 2009 by now shadow chancellor John McDonnell.

Mr McDonnell was suspended from the Commons for five days grabbing the mace in protest at the Government's decision to allow a third runway at Heathrow.

In 1976 former deputy prime minister Michael Heseltine was also reprimanded for picking up the ceremonial mace.

As a young Tory MP Mr Heseltine swung the mace in fury at the then Labour government's decision to breach pairing arrangements and force through a measure by one vote.