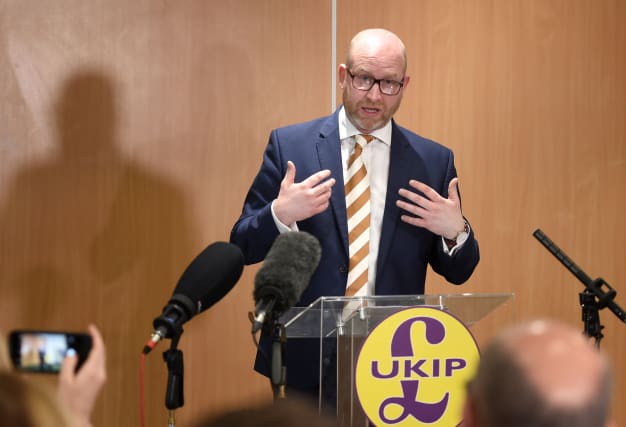 Mr Nuttall is the latest prominent figure to leave Ukip in protest at its direction under leader Gerard Batten.

Mr Nuttall said: “I am resigning because the party is being taken in a direction which I believe is harmful to Brexit.

“The association with Tommy Robinson will simply appal many moderate Brexit voters and inevitably be detrimental to the cause.

“The Tommy Robinson issue should have been shelved and debated within the party following Brexit, in line with the sensible decision taken by the National Executive Committee last month.

“The party leadership and my MEP colleagues have been aware of my views on this issue for some time.

“Putting Tommy Robinson front and centre, whilst Brexit is in the process of being betrayed is, in my view, a catastrophic error.

“To conflate Brexit and Robinson at this crucial moment is to put the Eurosceptic cause in danger and I cannot and will not be party to that.”

The move came as Ukip’s leader in Scotland, MEP David Coburn, also resigned in protest at the “English nationalist direction” adopted by the party.

Ukip’s most high-profile figure, Nigel Farage, quit the party earlier this week after calling for Mr Batten to be ousted over the appointment of Mr Robinson as an adviser on rape gangs and prison reform.