Shadow chancellor pledges biggest transfer of wealth to Scotland since 1945 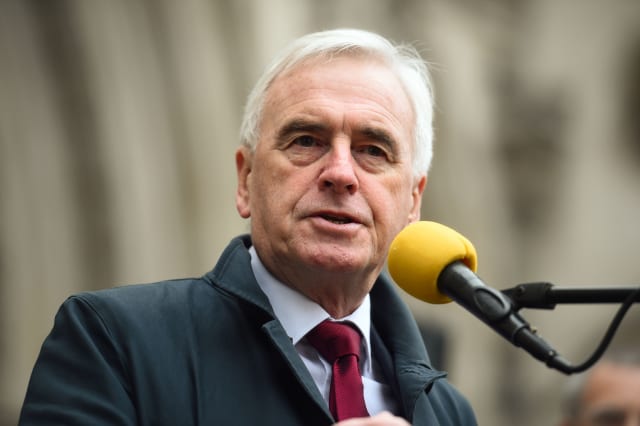 Labour has pledged to deliver the “biggest transfer in wealth and power” from London to Scotland for more than seven decades if it wins power in the next general election.

Shadow chancellor John McDonnell promised if Jeremy Corbyn is elected to Downing Street Labour will form the most “radically reforming” government since 1945.

While he accused the SNP of having “passed on” Conservative spending cuts to Scotland, he said Labour would bring an end to austerity with an additional £70 billion of cash for Scotland over 10 years.

Mr McDonnell made the pledge ahead of a two-day campaign trip to Scotland, during which he will hold talks with trade unions and business leaders, as well as youth groups.

Speaking ahead of a visit to Glasgow, the shadow chancellor claimed: “Scotland has suffered from a near decade of Tory and SNP austerity.

“The Tories at Westminster have imposed the bedroom tax and the rape clause on working-class Scots, as well presiding over a surge in food bank use caused by over eight years of austerity.

“At the same time, the SNP at Holyrood has simply passed on Tory austerity to communities by bullying councils into making cuts and running down crucial areas like further education, as well as underfunding Scotland’s NHS.”

The SNP’s Growth Commission report, which examined the economic prospects for an independent Scotland, provided a “version of neo-liberalism”, Mr McDonnell added, saying this was a “blueprint for at least a decade of austerity”.

He said: “By contrast, Labour in government at Westminster will halt austerity which our manifesto commitments could mean £70 billion more for Scotland over two terms.

“As Chancellor, this package will represent the biggest transfer in wealth and power from London to Scotland in postwar Britain.

“The next Labour government will be the most radically reforming one since that of Clement Attlee and Nye Bevan elected in 1945.”

But SNP MSP George Adam hit back and said: “The only way we can guarantee an irreversible shift in power from London to Scotland is through independence.”

Mr Adam stated: “It’s interventions like this that show exactly why Labour continue to languish in third place in Scottish politics, and can’t even beat one of the most incompetent Tory governments of all time.

“It was Labour who opposed Scotland having the powers over tax and welfare that they now demand the Scottish Government use.

“And it was Labour who offered the lowest funding settlement for the NHS, even less than the Tories, at the last election.”