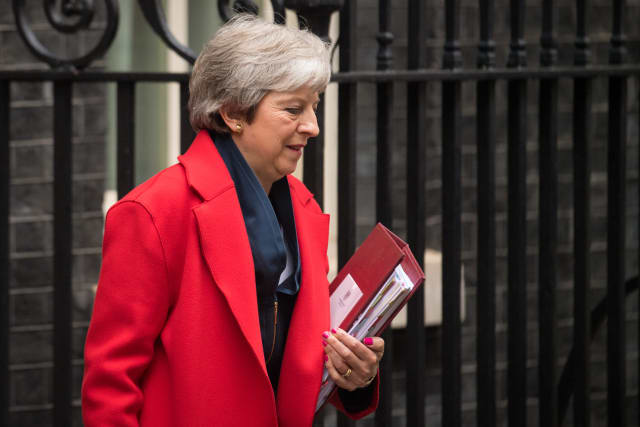 Theresa May has been given a glimmer of hope over the Brexit deal vote after a group of Tory backbenchers tabled an amendment that would give MPs some control over the controversial Northern Ireland border backstop.

The alteration to the meaningful vote on the Withdrawal Agreement would mean Parliament would have to approve a decision to trigger the backstop arrangement or extend the transition period beyond December 2020.

It was tabled by Northern Ireland minister Hugo Swire, Richard Graham and Bob Neill, hours after the Prime Minister indicated Parliament would choose between the two options after the UK formally quits the EU.

The move is likely to be seen as a bid to bolster flagging support for Nrs May ahead of a crunch Commons vote on her EU withdrawal deal next Tuesday – a showdown the PM made clear on Thursday morning she would not postpone.

It would add provisions for the Commons to “approve the Government’s proposed approach, including whether or not an extension to the implementation period should be pursued; and parliamentary approval of the commencement of the powers implementing the Northern Ireland backstop”.

Mr Graham, who sits on the Exiting the EU Committee, told the Press Association it had been clear for some time the backstop “was and remains the thing that gives colleagues the most concern”.

He said: “What we are trying to achieve is something that gets a lot of support from colleagues and that the Government, we hope, will take forward because it will make a real difference to the vote.”

Earlier ITV had joined the BBC in cancelling plans to broadcast a televised Brexit debate between the Prime Minister and opposition leader Jeremy Corbyn, after Labour and the Conservatives failed to agree which of the rival offers to accept.

Both channels had wanted to host the live programme on Sunday evening, two days before the vote, but it now seems unlikely a head-to-head will now go ahead.

Mrs May faced calls to postpone Tuesday’s vote with senior Conservative MP Sir Graham Brady, chairman of the backbench 1922 Committee, saying he would welcome the vote being deferred if no solution could be found to differences within the party over the backstop.

Sir Graham told BBC2’s Newsnight: “I think the most important thing is to have clarity about how we might remove ourselves from a backstop… if we were to enter into one in the future.

“It’s having the answer to that question of substance that is most important, not the timing, so if that question can be answered in the course of the next few days then all well and good.

“If it can’t then I certainly would welcome the vote being deferred until such time as we can answer that question.”

Former prime minister Tony Blair said Mrs May was facing the prospect of “hitting a brick wall at speed” next Tuesday, and would be better advised to act as “facilitator” in the search for a Brexit solution which can command the support of a majority of MPs.

Asked if Mrs May should pull the December 11 vote, Mr Blair said: “Personally, I don’t see what the point is in going down to a huge defeat.”

Chief whip Julian Smith acknowledged he faces an “uphill challenge” to persuade MPs to back Mrs May’s deal, but insisted “it’s all to play for”.

Speaking to ITV News, Mr Smith insisted there was no “Plan B” ready to be unveiled if the PM’s proposals are voted down.

The backstop, intended to prevent the return of a hard border in Northern Ireland, is highly controversial as Brexiteer MPs claim it traps the UK into obeying rules set by Brussels without a say over them.

The Government says it aims to conclude a comprehensive trade deal with the EU before a backstop arrangement would be needed.

Under the Withdrawal Agreement, the backstop would be introduced if a trade deal had not been agreed by both sides by the time the transition period ends in December 2020.

However, the transition period could be extended for a maximum of two more years.

Asked on BBC Radio 4’s Today programme if she would be happy for Parliament to adjudicate on whether to go into the backstop or extend implementation, the PM said: “I think people are concerned about the role of the UK in making these decisions.

“And, the obvious, in terms of the UK, is for it to be Parliament that makes these decisions.”

Mrs May’s comments came as the Democratic Unionist Party (DUP) insisted it will withdraw support for her Government if the Prime Minister presses ahead with the Brexit deal with the EU.

Number 10 sought to play down the Prime Minister’s meeting with a number of Cabinet ministers on Thursday afternoon.

Downing Street said there was not a full Cabinet meeting and “nothing to get excited about”.