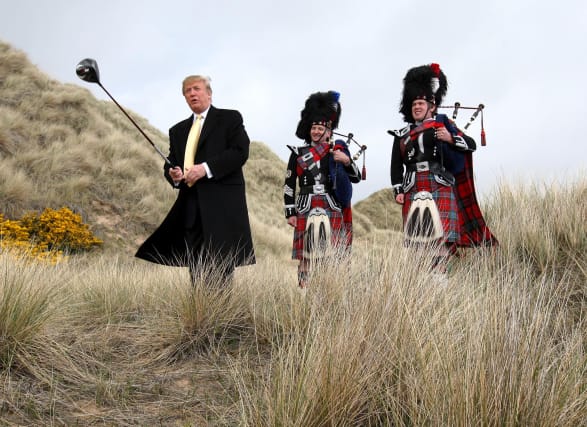 Councillors have been urged to take a stand against Donald Trump as a hearing is set to take place over plans for 550 homes at the Menie estate.

A council committee is to meet for a pre-determination hearing on Wednesday December 12 to allow views to be expressed on the controversial proposals.

Councillor Martin Ford, one of Mr Trump’s leading critics in Aberdeenshire, will not be taking part in a vote on the application so is able to give his views in advance.

He urged his elected colleagues to reject the proposals if they find them to contradict planning policy, which he believes they do.

He added: “Elected individuals who are watching by on the other side of the street holding their noses just won’t do.

“We have to say this isn’t acceptable – Scotland and the environment cannot stand for this.”

It is the latest in a long-running saga which includes Alex Salmond’s Scottish Government overturning the local authority’s rejection of the 2006 proposals in 2008.

At the time, the former First Minister said: “The economic and social benefits for the north-east of Scotland substantially outweigh any environmental impact.”

The development faced criticism from members of the community for destruction of a sand dune system of special scientific interest, although it did receive widespread support from business leaders.

The original plans promised to deliver £1 billion of investment, with the construction of two golf courses, a 450-bedroom hotel and housing as well as holiday apartments and golf villas.

A number of these proposals have not been realised.

The upcoming hearing for plans to build 550 homes seeks to provide “clarity”, so councillors are fully informed on all aspects of the application before making a decision on whether to approve it.

Mr Ford said he would reject the proposals even if the houses were low-cost and affordable.

He added: “It’s a stupid place to put housing. You put housing where they have access to schools, public facilities and public transport – not in a green field sat where everybody’s car dependent.”

Councillors will visit the relevant site prior to the hearing but will not hear arguments for or against the proposals during the visit.

The meeting will be minuted and all points raised will be placed before the Formartine area committee when they discuss it, before passing the view to full council.

H&M to close hundreds of stores as online shift accelerates