Nigel Farage has announced he is quitting Ukip.

The former leader said he had made the decision because he is uncomfortable with the direction Ukip has taken in recent months.

Mr Farage had previously called for Ukip leader Gerard Batten to be ousted after he appointed English Defence League (EDL) founder Tommy Robinson as an adviser.

Writing in the Daily Telegraph, Mr Farage said: "And so, with a heavy heart, and after all my years of devotion to the party, I am leaving Ukip today.

"There is a huge space for a Brexit party in British politics, but it won't be filled by Ukip." 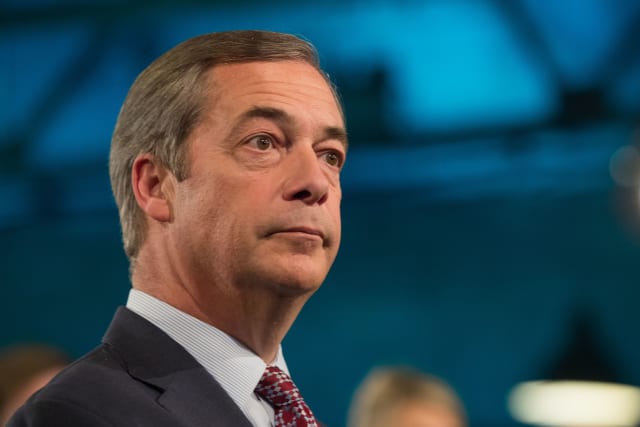 Mr Farage insisted Ukip had been successful in the past because it had a policy of "excluding extremists".

The ex-leader said Ukip was becoming a party of "street activism".

Mr Farage said: "Under my leadership of Ukip, the party banned former members of the BNP and EDL from joining.

"Many accusations of racism and extremism were thrown at us, but I strongly maintain they were untrue.

"Under Gerard Batten's leadership, however, the party's direction has changed fundamentally.

"Analysis of weekly local council by-elections up and down the country shows that Ukip now fields very few candidates.

"Worse still, many of our very best organisers and activists on the ground have resigned their positions.

"This means we no longer have a professional campaigning team.

"The party of elections is quickly becoming a party of street activism, with our members being urged to attend marches rather than taking the fight to the ballot box."

Mr Batten tweeted: "I hear that Nigel Farage has resigned from UKIP.

"Nigel & I were founder members of UKIP in 1993. I have always given him full credit for his work in UKIP bringing about and winning the Referendum. However, I feel that he left UKIP in spirit after the Referendum."