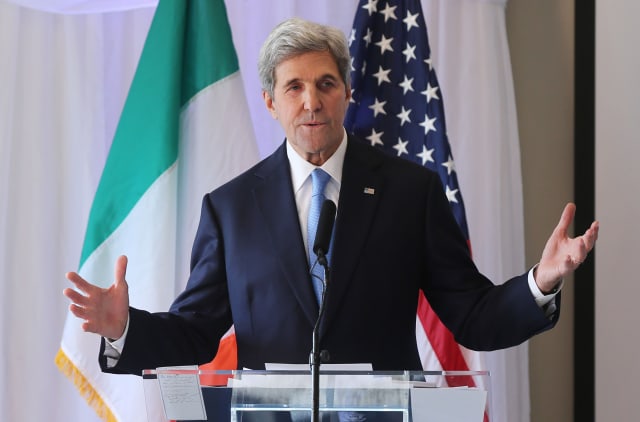 Former US Secretary of State John Kerry has warned it is “imperative” to resolve the issues thrown up by Brexit surrounding the Irish border in a way that does not reignite the Troubles.

Mr Kerry made his comments during an event in the United States to mark the 20th anniversary of the Good Friday Agreement.

He told the BBC’s Sunday Politics programme that a hard border between Northern Ireland and Ireland could “re-heat passions”.

“Under the Stormont Agreement, the last 20 years have been characterised by a border which people have been able to cross easily,” he said.

“If you have a certain kind of Brexit with a hard border you could see great difficulties emerge as a consequence of that.

“I have concerns that depending on what kind of Brexit takes place it could have a negative impact on the progress made in the last 20 years.

“It could re-heat passions one way or the other or both depending on what it is. We have to see how this is going to be resolved.

“It’s imperative that it’s resolved in a way that it does not reignite the Troubles.”

The Democrat stressed his meeting with Northern Ireland’s parties was not a negotiation, describing it instead as an “informal meeting”.

“It’s an academic meeting at a university where the parties came to be able to explore their dynamics and to have a candid, out of the spotlight, frank conversation with people who know something about the issue and care about the issue,” he added.

He refused to say whether he would chair any new talks at Stormont or whether an independent person should be appointed in any future talks process.

He added that it was important for dialogue to begin and steps taken to help “calm things down”.

One of the architects of the Good Friday Agreement, Senator George Mitchell, who also attended the Yale conference, said the appointment of an outside facilitator “could be helpful”.

“It has been helpful in the past and that’s a decision however for the people of the UK, Northern Ireland and Ireland to make,” he said.

“The decision was to have me involved and I welcomed it, President Clinton welcomed it and the American people did all they could to be helpful.

“But the fundamental decision on whether there should be external assistance should come internally.”