RSPCA officers rescue Roxy the bulldog from a tight spot 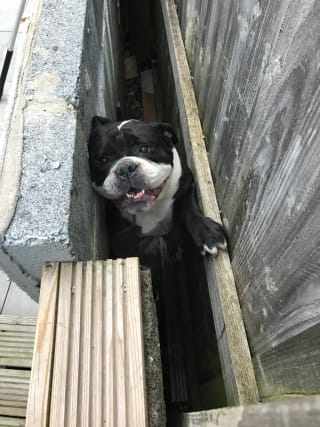 A bulldog had to be rescued after she got stuck between a rock and a hard place.

Adventurous Roxy got trapped between a wall and a fence in a back garden in Heol Cleddau in Waunarlwydd, Swansea, last week.

The dog was trapped for three hours but the RSPCA officers were able to free her within 40 minutes of receiving the call.

Miss West said: “Poor Roxy was unable to move free – but she was very calm, and seemed remarkably pleased with herself to have got into such a pickle.

“Thankfully, we were quickly able to get to her, securely pull her from the tight gap, and return her to her very relieved owners.

“It was very awkward to free her, so we needed two officers – but, thankfully, Roxy was absolutely fine.

“We love nothing more than a happy ending and RSPCA Cymru is just happy we were able to help this dog in her hour of need.”

This is not the first such incident in the south-west Wales area in recent times.

In July, a 13-year-old cat was rescued after being found stuck between fencing in Pencoed, while in March 2017, another cat was freed from a 2.5in (6.4cm) gap between a wall and a wooden fence by an RSPCA officer in Skewen.