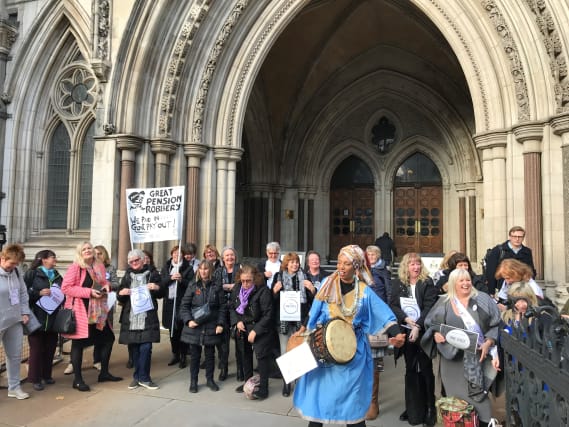 Women affected by changes to the state pension age have won the first stage of their High Court challenge against the Government.

Dozens of affected women celebrated outside the Royal Courts of Justice after their claim that they were unlawfully discriminated against was allowed to proceed.

Three women who were born between 1950 and 1953 claim the raising of their pension age from 60 to 66 discriminates against them on the grounds of their age and sex, and that they were not properly informed of the changes in time to adjust.

Michael Mansfield QC, representing the claimants, told the High Court that the changes affected “a minimum of 3.8 million women”, some of whom were given as little as 18 months’ notice.

At a hearing in London on Friday, Mrs Justice Lang said the women’s case was “arguable” and granted permission for their claim to proceed to a full hearing.

The Government introduced changes to the state pension age, most recently in 2011, in an attempt to ensure “pension age equalisation”, so that women’s pension age matched that of men.

He suggested the Government had “made it clear that the real object of this exercise has been cost-cutting and saving money”, and that there was “no question of policy principle here”.

Catherine Rayner, also representing the claimants, said the changes meant that “£5.3 billion (has been) saved from women”.

She said the women’s previous pension age was “a fundamental part of the financial make-up of their lives”.

She added that the changes had a “significant adverse impact, impacting only on women – and only women – who were in the cohort born in the early 1950s”.

Ms Rayner also referred to the “historical inequality” they had suffered, saying they were “a generation of women for whom pay inequality was a fact of life”.

Ms Rayner added: “There is a historical inequality which has been compounded by the effect of the pension equalisation falling specifically on this group.

“Women have been put into poverty, women have been forced onto benefits as a result of losing out on the pension which they would have relied upon.”

Julian Milford, for the Department of Work and Pensions, said the changes were intended to bring about “the equalisation between genders of the age of entitlement for the state pension” and to “ensure as a matter of inter-generational fairness that working age taxpayers were not asked to shoulder an unreasonable funding burden”.

He also conceded that it was intended to “help alleviate massive fiscal pressures following the financial crash of 2008”, but added: “This is not simply a question of cost.”

After the hearing, Yvette Greenway from the Back to 60 campaign said: “This is such an important step and this has made such a difference to so many ’50s women.

“It’s quite rightly gone in their favour.”

Dozens of affected women and their supporters sang and danced outside the Royal Courts of Justice after the decision, chanting: “Permission granted!”

The arrival of their legal team was also greeted with huge cheers and saw Mr Mansfield celebrate by twirling his hat around his head.