This is the moment a gender reveal stunt went horribly wrong, starting a 45,000-acre fire which caused millions of dollars' worth of damage.

The blaze, near Green Valley in Arizona, was started by Dennis Dickey, a 37-year-old off-duty border patrol agent who was attempting a stunt to reveal the gender of an unborn baby in which he shot a rifle at a target in the middle of a grassy area.

In the video, blue smoke – presumably indicating that the baby was a boy – can be seen briefly as the sparks ignite the dry grass all around the target.

Those flames quickly fanned and started a blaze which became known as the Sawmill Fire when it raged in April last year. 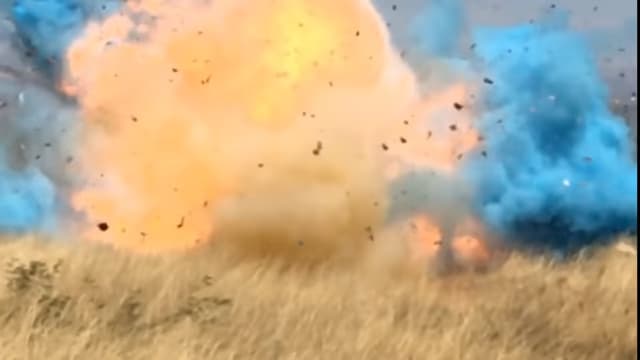 According to the US Attorney's Office, the damage caused by the fire totalled more than 8 million US dollars.

Dickey reported the fire immediately and co-operated with law enforcement, subsequently pleading guilty to a misdemeanour breach of US Forest Service regulations.

He was handed five years' probation as well as a fine of 200,000 US dollars – and agreed to make a public service announcement about how the fire started.