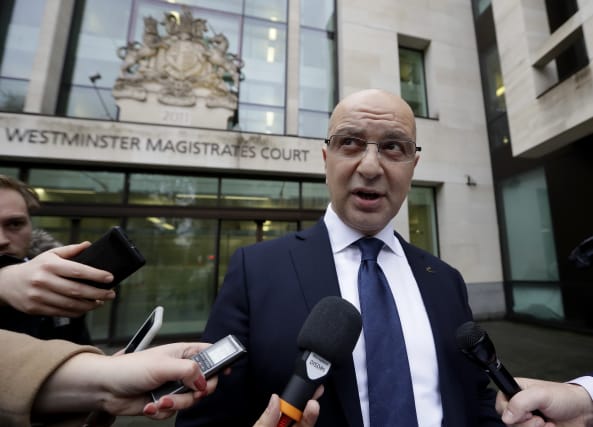 A prominent critic of Turkish president Recep Tayyip Erdogan has had the “politically motivated” extradition request launched against him by Ankara thrown out of court.

Hamdi Akin Ipek, 54, was arrested in May and had his passport confiscated after the extradition request was made based on accusations he had links to the attempted coup launched against Mr Erdogan in 2016.

The media tycoon, whose newspapers and TV stations under the Koza-Ipek Group were seized by the Turkish president, has lived in Britain since 2015 and he appeared at Westminster Magistrates’ Court alongside two other men on Wednesday.

District Judge John Zani said he was going to discharge Mr Ipek, Ali Celik and Talip Buyuk from the extradition request and would uphold the challenges made on their behalf.

“I am satisfied that this is a politically motivated prosecution,” he said.

Judge Zani said he was also satisfied if they returned to Turkey there would be a real risk of breaches of Article 3 of the European Convention of Human Rights, which states no-one should be subjected to torture, degrading treatment and punishment.

He told the court Turkey has 14 days to appeal against the decision and that Turkish officials have “given an indication” they will do so.

The Turkish government claims Mr Ipek and the Koza-Ipek group were “financing terrorism” and “making propaganda of a terrorist organisation”, his legal team said.

Speaking outside the court, Mr Ipek said he is “thankful that the extradition request has been refused”, adding that while he was confident the British judicial system would exonerate him, it has been “extremely stressful”.

He said: “The Turkish government has waged a campaign of harassment and intimidation against me, my family and my employees for the past three years for no other reason than I am perceived as an opponent of the Erdogan regime.”

He said the Koza-Ipek Group which his father founded and has traded for more than 70 years has been closed down because the regime thought its coverage “occasionally included material that was critical of the government”.

He added: “In the last six months, these attacks have made their way to British shores. I have been followed in London and secretly filmed by those acting on behalf of the Erdogan regime.

“I have received dozens of death threats, provoked by the actions of those at the highest level of the Turkish government.”

Mr Ipek said the threats and harassment waged against him in Britain have been reported to police, but he is not worried he is under threat.

He told reporters his brother has been in jail in Turkey for more than three years on “baseless grounds” and with no access to justice.

He also highlighted how there are thousands of other businessmen, judges, civil servants and journalists “unable to make their case due to the collapse of democracy and the rule of law in Turkey”.

He added: “The human rights abuses taking place are unacceptable for any civilised country and action must be taken to urgently end this.”

He said that while he would not go back to Turkey tomorrow, he would like to return one day, as he called on politicians in his home country to respect the rule of law.

Mr Ipek’s solicitor, Michael Drury, said “seldom can there have been a case of a nation state persecuting three obviously innocent men on perverse grounds”.

He added: “The British public will find it surprising that a case like this was certified by the Home Secretary for bringing before the court.”