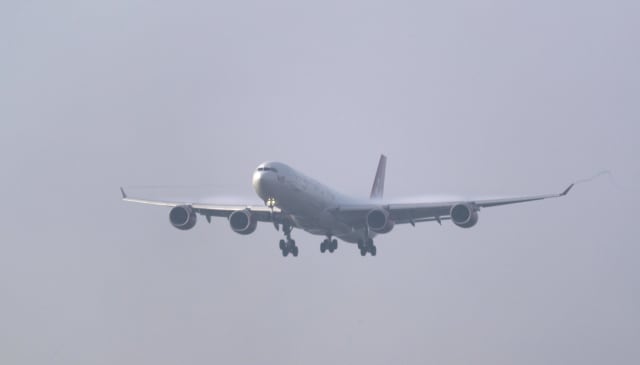 Hundreds of flights serving London airports were cancelled or delayed amid thick fog.

By noon some 62 flights to or from London Heathrow on Tuesday were cancelled and a further 380 were delayed by more than 15 minutes.

That means more than one in three flights were disrupted.

British Airways alone saw 45 cancellations and 237 delays at the west London hub, which is the UK’s busiest airport.

The figures were published by aviation data firm FlightStats.

Fog reduces visibility for pilots and air traffic controllers, meaning the safe distance between aircraft is increased. This disrupts the normal pattern of take-offs and landings.

A Heathrow spokeswoman said: “This morning’s heavy fog has led to reduced visibility across all London airports which may result in some passengers experiencing disruption to their journeys today.

“Passengers are advised to check their flight status with their airline before coming to Heathrow. As always, our top priority is the safety of passengers and we apologise to those whose travel has been affected by today’s weather.”

A statement on the National Rail Enquiries website read: “Southern and Thameslink have received a number of reports from drivers that due to heavy fog they are having to run at a reduced speed due to reduced visibility.

“When thick fog is present, drivers are unable to see signals from their normal distances and to continue to operate safely they must drive at reduced speeds so that they are able to view signals.”

The derailment of a Great Western Railway train in West Ealing at around 7am affected trains serving Heathrow.

One of the lines was blocked, causing delays and cancellations to London Paddington-bound services from Heathrow and Slough.

The line was reopened around 60 minutes later but disruption was expected to continue until 6pm as services recover.

A Network Rail spokesman said: “Our engineers are on site and will clear the derailed train as soon as possible.”

Meanwhile, the UK is braced for a blast of gales and heavy rain as Storm Diana sweeps in from the Atlantic.

The Met Office has issued severe weather warnings from 3am on Wednesday until 3pm on Thursday as gusts of up to 80mph could hit western parts of the country.