CCTV not working at stabbing hospital 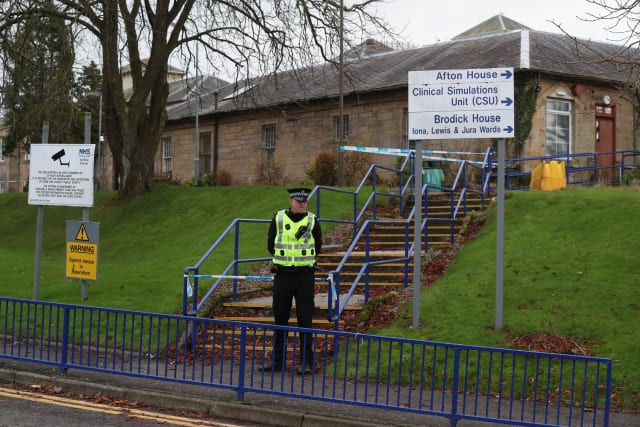 CCTV at a hospital where a health worker was stabbed was not working, it has emerged.

A 42-year-old community support worker is said to be in a stable condition after she was attacked in a car park outside Ailsa Hospital in Ayr at around 10am on Thursday.

Police have been appealing for witnesses but the health board has now confirmed that the CCTV system at the hospital has not been in use “for a number of years” despite signs within the grounds saying there is 24-hour surveillance.

NHS Ayrshire and Arran has launched a significant adverse event review alongside the police investigation and said it is providing support to staff.

Health board chief executive John Burns said: “The analogue CCTV system at Ailsa Hospital has not been operational for a number of years.

“We have an ongoing review of how to make best use of CCTV across all our sites.”

Police Scotland have appealed for anyone who may have captured footage of the attacker on dashcams to come forward.

The suspect is described as female, aged between 30 and 50, around 5ft 2in to 5ft 3in and of slight build, with a pale complexion.

She was wearing a dark woolly hat and a dark jacket.

A woman was arrested on Thursday over what was described as an unrelated matter but police said she was “of interest to the inquiry”.