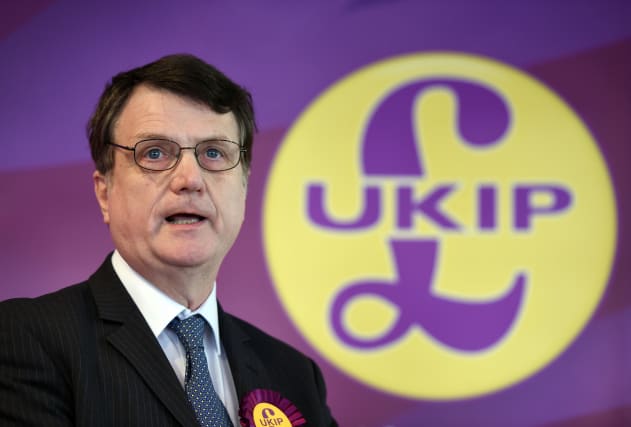 Ukip leader Gerard Batten has defended his decision to appoint far-right activist Tommy Robinson as an adviser, after the move was branded appalling by his predecessor, Nigel Farage.

Mr Farage accused Mr Batten of taking the Eurosceptic party in a “shameful” direction and called for him to be ousted as leader.

But Mr Batten denied that he was taking Ukip to the extremes and offering a welcome to racists.

He said Mr Robinson – real name Stephen Yaxley-Lennon – would help him turn Ukip into a “mass movement … a party for ordinary people”.

Mr Batten told BBC Radio 4’s World At One: “I think he is very courageous, he is very brave in what he does. He stands up for these victims of industrialised sexual abuse and by and large I think he does positive things.”

Mr Farage said he was “appalled” by the announcement that the controversial founder of the English Defence League (EDL) will advise Mr Batten on rape gangs and prison reform.

“The NEC of the party voted overwhelmingly last week not to have a ballot of members to let the man, potentially, join the party,” Mr Farage told Radio 4’s Today programme.

“But Gerard Batten has got this sort of fixation with Tommy Robinson and discussing Islam, and dragging Ukip into a direction of effectively being a sort of street activist party.”

“This blows a hole in all of that.”

Asked if the appointment was the end of Ukip, Mr Farage said: “Well, I haven’t given up yet.

“I will be writing to the National Executive Committee of the party today and urging that we have a vote of no confidence in Gerard Batten as leader, that we get rid of him.

“We can have one last go at getting rid of somebody who, as leader, is dragging us in a shameful direction.”

Speaking on World At One, Mr Batten said: “I’m amazed that Nigel is so concerned about this party now. He has done nothing to support Ukip in the last two years.

“This is not taking the party in the wrong direction. He has known me for 26 years, he knows what kind of person I am.”

Challenged over comments in which Mr Robinson once said he would remove all adult male Muslims who had recently entered the country, Mr Batten said: “Lots of people say things in their youth which they then regret and retract from later on.

“I’ve no idea whether that quote is true or not, I’d have to ask him about that. But that’s certainly not his view now.”

Asked about an occasion when Mr Robinson described an area of Manchester as housing “enemy combatants who want to kill and maim you”, the Ukip leader said: “If he was referring to some of the terrorists who live in these places, we certainly know that was true, don’t we, because there have been so many instances of it.”

Mr Batten said that in his role as special adviser, Mr Robinson would not have to join Ukip, which bars former members of racist organisations.

But he said that, unlike the British National Party or National Front, the EDL did not have a formal membership system, making it difficult to prove whether an individual should be excluded from Ukip.

He said Robinson’s appointment “signals to a lot of people out there that they can come and support us”.

He added: “I’m taking the party in a new direction, which is that I want to make it a mass movement.

“I want us to be the party that represents ordinary working people, the unemployed who would like a job if they could get one, and small business owners. I want a party for ordinary people.”