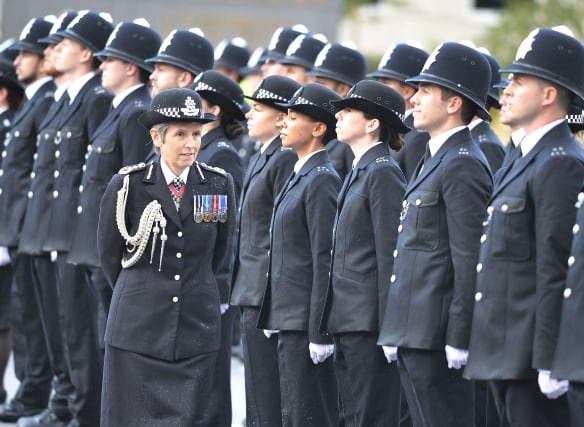 Women should not be put off joining the Metropolitan Police despite a recent violent attack in which a female officer was kicked, the deputy assistant commissioner has said.

Lucy D’Orsi said two suspects have been charged following the incident in which two police officers were assaulted in Merton, south London, on Saturday.

Footage of the violent struggle, which was shared hundreds of times online, shows a male officer being dragged around the road, while his female colleague took a flying kick to the chest.

Ms D’Orsi was speaking as Scotland Yard marked a century of having female officers on the force, and launched a drive to recruit more women.

“Fortunately, I feel that extremity of violence is still rare. I would encourage people, and for it not to put them off joining policing, that is not what we are faced with all the time,” she said.

She stressed none of her colleagues within the force “come to work and expect to be assaulted”, condemning the attack as “absolutely despicable”.

She added: “That level of violence in my view is completely unacceptable.

“It is also really disappointing that people chose to just film it or drive by, and for me it is important people do think about calling the police and try and get help for officers.”

A century ago on November 22, then commissioner Sir Cecil Macready officially announced the Met would employ female officers.

Known as the women patrols, they took to the streets of London for the first time in February 1919.

Almost 8,000 women now make up the force across a number of roles.

But women account for just 27% of officers, and as the campaign was launched Commissioner Cressida Dick said the long-term aim is to reach a target of 50%.

Ms D’Orsi said she is optimistic the target is achievable.

She said the “range of opportunities for a fabulous career in policing is absolutely outstanding”, adding that the campaign to diversify the Met is needed because the more the force represents the communities they serve, the better.

Agreeing with Ms Dick that there is “no better time for women to be in policing”, Ms D’Orsi stressed no roles within the force are closed to them.

Highlighting the diversity within specialist roles, such as firearms, counter-terrorism and protection officers, she said there is a wealth of choice for women.

“We have been and will continue to be trailblazers in terms of the equality,” she added.

She said the force is keen to improve the representation of women within its firearms command, and admitted it has “some way to go” on the issue.

Asked what she would say to those who believe women are not as physically capable as their male counterparts, she said that is “absolute nonsense”.

She added: “Ultimately this is about catching people that are intent on committing crime and harming people – I think women are equally capable of that.”

Ms D’Orsi joined Scotland Yard in 1992, and said she has never been conscious of being disadvantaged because she is female, and has not witnessed any overt discrimination.

Describing the Met of today, she added: “Male colleagues are as quick to call out unacceptable behaviour as female officers, and I think for me that is really refreshing.”