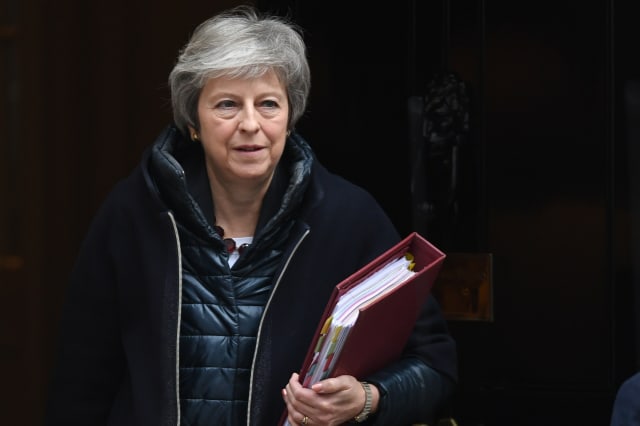 Theresa May and senior Government ministers have warned that Britain may not leave the European Union if MPs vote down the Prime Minister’s Brexit deal.

The warnings came amid suggestions from Brussels that a summit to sign off on the draft withdrawal agreement on Sunday could be called off unless progress is made on finalising a political declaration on future relations, with one senior official saying: “We’re not there yet.”

Mrs May was flying to the Belgian capital for tea-time talks with European Commission president Jean-Claude Juncker, at which she will seek to reach agreement on a framework for future relations in areas like trade and security.

Spain has raised concerns about the treatment of Gibraltar in the proposed text, while France is understood to be pushing for better rights of access to UK fishing waters.

Commission vice-president Valdis Dombrovskis said that for Sunday’s summit to go ahead, “we will need to have agreed beforehand the political declaration on the future relationship and we are not there yet”.

He added: “Sherpas are due to meet on Friday. They will need to see a final text before then, and the Commission stands ready to consider the text and take any action at any time.”

Since unveiling her draft agreement last week, the PM has repeatedly warned MPs that failure to approve it would risk a no-deal Brexit, or no Brexit at all.

But answering questions in the Commons on Wednesday, she told MPs that the alternative to her deal “will either be more uncertainty, more division, or it could risk no Brexit at all”.

And Work and Pensions Secretary Amber Rudd told BBC Radio 4’s Today programme: “It is my view that the House of Commons will stop no-deal.

“There isn’t a majority in the House of Commons to allow that to take place.”

The minister, a former Remain campaigner who replaced Leave-backing Esther McVey in the Cabinet following her resignation last week, said she expected MPs to back Mrs May’s plan after peering into the “abyss” and pulling back.

But she added: “If it doesn’t get through, anything could happen.

“The Brexiteers may lose their Brexit.”

Meanwhile, Chief Secretary to the Treasury Liz Truss told BBC Radio 5 Live: “If my colleagues in Parliament don’t vote for this then we’re in grave danger of not leaving at all.”

Mrs May was challenged by Ms McVey at Prime Minister’s Questions to confirm that Brexit will happen “come what may”.

The PM replied: “I can give her the assurance that the United Kingdom will leave the European Union on March 29 2019.”

The PM’s official spokesman said that she remained determined to deliver Brexit next March as planned, and was confident of doing so, and still believed that a failure by MPs to support her deal risked either no deal or no Brexit.

But the ministers’ comments were seized upon by Labour, whose shadow chancellor John McDonnell told an event at Reuters in London that there was “an overwhelming majority opposing anything that smacks of being no-deal”.

Sir Keir said: “After these comments from Amber Rudd, it’s time for the Government to drop the false choice between a bad deal and no deal, and to come forward with a plan that can command the majority support of Parliament.”

Scottish First Minister Nicola Sturgeon said: “Amber Rudd exposes the falsity of the PM’s tactics – it is not a choice between her bad deal or no deal. There are better alternatives.”

The People’s Vote campaign for a second referendum said Ms Rudd had “torpedoed the PM’s threat of no deal”.

Mrs May came under pressure at Prime Minister’s Questions from Conservative backbenchers who fear her draft agreement will leave the UK trapped in a customs union with no way of leaving without the EU’s consent.

Labour leader Jeremy Corbyn said the “half-baked” agreement was a “failure” which would be rejected by MPs.

And the deputy leader of the Democratic Unionist Party, Nigel Dodds, told the PM that protections for Northern Ireland agreed last December had been “deleted” from the deal.

Downing Street sources insisted that the arrangement under which the DUP’s 10 MPs prop up Mrs May’s minority administration in the Commons remains in force, despite the smaller party’s decision not to vote with the Government on Tuesday.

The move, which forced the Government to cave in to a series of Labour and SNP amendments to its Finance Bill, has put huge strain on the agreement reached in the wake of last year’s inconclusive General Election.

The DUP are expected to join Labour, other opposition parties and Tory rebels on both sides of the Brexit debate in voting against Mrs May’s deal next month.

Brexiteer ministers want Mrs May to use her meeting with Mr Juncker to press for clarity on how the UK can avoid or end the use of the backstop, which would require the whole UK to be in a single customs territory with the EU and force Northern Ireland to align with many of Brussels’ single market rules after 2020, unless an alternative is found.

One Brexit-backing minister said that the negotiation process was “not over until it’s over” and it was now a case of “who blinks first” as Brussels did not want either the backstop to be implemented or the prospect of the UK crashing out without a deal.

German Chancellor Angela Merkel set her face against any change to the deal to give the UK the independent right to end the backstop.

Mrs Merkel told the German Parliament: “We have placed value, and I think this is right, on the fact that Britain cannot decide unilaterally when it ends the state of the customs union, but that Britain must decide this together with the EU.”