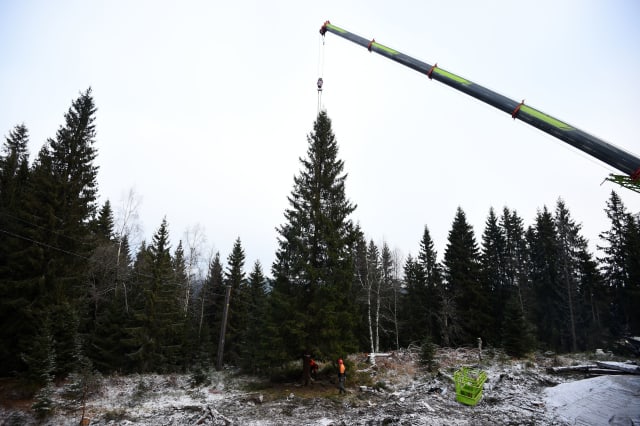 Trafalgar Square is set to receive a “Disney-like” Christmas tree from Norway after a 71-year-old annual tree-felling ceremony.

The now traditional tree is a symbol of gratitude from the Norwegian capital Oslo for Britain’s assistance during the Second World War.

Standing at 21 metres high, the Mayor of Oslo described this year’s gift as “very symbolic” as it started growing just around the time the war began.

The ceremony in the forest of Normarka, just outside Oslo, was attended by the Lord Mayor of Westminster, Councillor Lindsey Hall, who said both countries had their own idiosyncrasies, which the UK is “trying to square off with Brexit”.

On Tuesday, the Norwegian Spruce was cut by both mayors in front of an audience of carol-singing schoolchildren.

“It smells beautiful and we think it’s 80 years old so it started to grow during the Second World War – which is very symbolic.

“Our forester is very, very competent and they chose this tree around 20 years ago.”

“It’s important for us that the tree looks nice. They have to take away the trees around the Trafalgar Square tree so they can grow and be beautiful.

“I think they also talk to it and hug it sometimes – so this tree has really been spoiled over the years it has been in Oslo and I think it will be a wonderful tree at Trafalgar Square.”

Cllr Hall said the tree would be named after forester Jon Christiansen, who had been choosing the trees for 10 years.

She said: “I think we have such an enduring relationship and great friendship and it goes back many many years – nothing will rock that.

“I think we both have our idiosyncrasies and independencies – which obviously we are trying to square off with Brexit.

“Norway has always been its own country but very much part of Europe as well – so I think we will be friends forever.

“What an incredible tradition. I think it’s probably the greatest honour of the mayoral year.

“Previous Lord Mayors have always talked with great joy and happiness of this visit.”

The tree is set to be transported to London and its lights will be turned on at a ceremony on December 6.