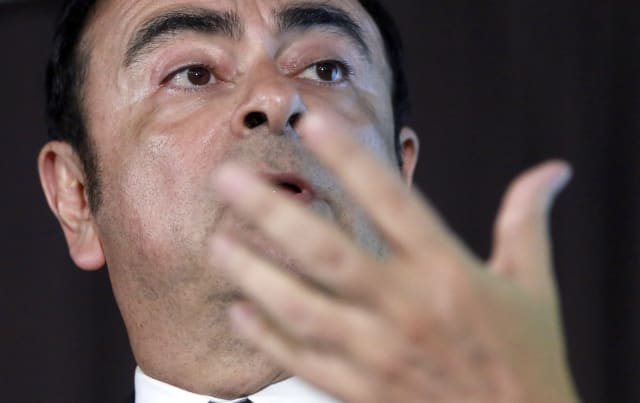 The arrest of Nissan Motor Co’s chairman Carlos Ghosn on charges he under-reported his income and misused company funds caused the company’s shares to tumble and left many in Japan shocked.

Prosecutors said on Tuesday that they were holding Mr Ghosn for allegedly collaborating to falsify securities statements and under report Mr Ghosn’s income.

A second Nissan executive, Greg Kelly, was also suspected of collaborating with him to under-report some five billion yen (£34.5m) in Mr Ghosn’s income from 2011-2015.

Chief Cabinet Secretary Yoshihide Suga said on Tuesday that the government was watching for economic fallout from the scandal at one of the world’s biggest car makers.

“It’s extremely regrettable,” Mr Suga said of the arrest. “We will watch the development closely.”

Mr Ghosn was arrested on Monday and Nissan’s chief executive Hiroto Saikawa said the company’s board will meet on Thursday to approve his dismissal.

Prosecutors refused to say where he was being held in Tokyo.

There was no word from Mr Ghosn himself about the situation. He reportedly was questioned and arrested shortly after arriving on Monday from overseas aboard a private jet.

The Brazilian-born executive became one of the car industry’s most powerful executives by engineering a turnaround at Nissan and leading the company for nearly two decades.

The scandal abruptly threw into question Mr Ghosn’s future as leader of the Renault-Nissan-Mitsubishi alliance, which sold 10.6 million cars last year, more than any other manufacturer.

Mr Saikawa, in a 90-minute news conference late on Monday, said the company was overdue for some change and that power had been too heavily concentrated in one person.

The scandal was a “negative outcome of the long regime of Mr Ghosn,” he said.

But experts said it is unlikely he will be able to stay on there or at Renault, where he is also chief executive. Renault said its board will hold an emergency meeting soon.

Companies in the alliance own parts of each other and share investments in new technologies, among other things. Renault owns 43% of Nissan, which owns 15% of Renault and 34% of Mitsubishi.

The allegations are a serious blow at a time when Nissan is still getting over a scandal in which it admitted altering the results of emission and fuel economy tests on vehicles sold in Japan.

A press release by the prosecutor’s office in Tokyo said Mr Ghosn and Mr Kelly collaborated to under-report Mr Ghosn’s income as 4.99 billion yen even though it actually was almost 10 billion yen, submitting falsified securities statements to the regional finance bureau.

The compensation from Nissan was only a part of Mr Ghosn’s overall income since he also was paid salaries by the car maker’s alliance partners Renault SA and Mitsubishi Motor Corp.

Nissan’s shares fell 5% in Tokyo trading on Tuesday. Shares in Renault plunged 8.4% in Paris on Monday.

A next step by prosecutors was expected soon. Police can hold suspects without charge for days, but prosecutors have only 48 hours to decide whether to press charges.

If they decide they need more time, they can hold a suspect for up to 20 more days.

Mr Ghosn signed a contract this year that would have run through 2022. Of French, Brazilian and Lebanese background, he lives in both Japan and France, where he earlier turned Renault around, making it a global player.

Nissan said it informed the authorities about suspicions of falsified financial reporting and misuse of company funds and assets by Mr Ghosn after a months’ long investigation prompted by a whistleblower.

Mr Saikawa provided only limited details about the case, saying he was constrained because of the criminal investigation under way.

Apologising repeatedly, he vowed to improve the company’s governance.