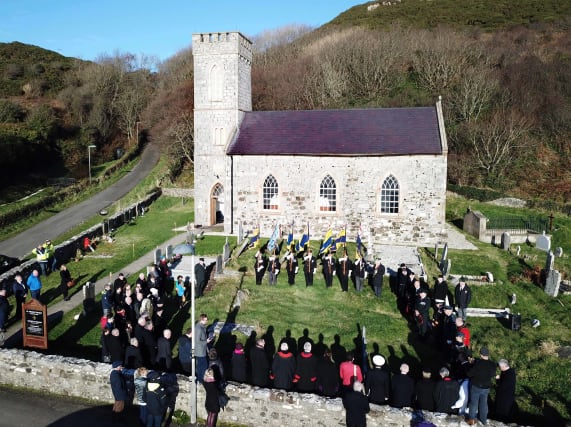 The final Battle’s Over event has taken place on Rathlin Island off the coast of Northern Ireland.

A beacon was lit on the island on Sunday in what was the last event in the Battle’s End series to commemorate the centenary of Armistice Day.

The armistice which ended the First World War came into force at 11am on November 11, 1918.

Events took place around the UK and across the world to mark the centenary of the end of the First World War.

On Rathlin Island on Sunday, a beacon was lit and a service took place at St Thomas’ Church where wreaths were laid at the graves in the adjoining graveyard to remember lives lost on HMS Racoon and HMS Viknor.

“The Great War is part of Rathlin Island’s rich maritime history so it was fitting for the community to have this opportunity to remember,” he said.

“Along with the wartime graves, the wreckage of HMS Drake lies just off the island shoreline following a torpedo attack in 1917.

“A buoy still marks the site where 18 lives were lost, and this serves as a lasting reminder of how our area was directly affected by events of 100 years ago.”