Armed gang use car in Selfridges ‘smash and grab’ 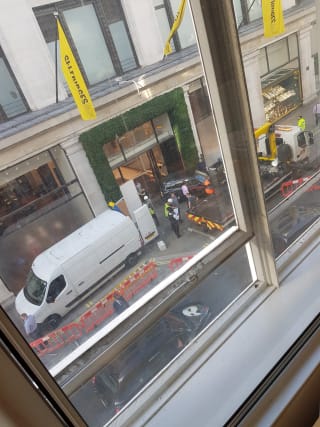 An armed gang used a car to evade security and smash into Selfridges to steal designer handbags, police have said.

The group of four men launched the "smash and grab" raid at the luxury London department store in the early hours of Tuesday morning.

A security guard was threatened with a knife and another driven at when they attempted to stop the attackers as they broke into the Oxford Street store.

The gang were captured on CCTV before they fled in another car, which police have described as a white VW Golf.

Selfridges said on Tuesday: "We can confirm there was a break-in at the Oxford Street store this morning.

"Nobody was injured and the police are investigating. The store is continuing to trade as normal."

An investigation is underway following a smash and grab in Oxford Street #Westminsterhttps://t.co/8khRX9le0zpic.twitter.com/W1YSG6fgCD

Detective Constable Tom Aylward said: "This raid was targeted and lasted a matter of minutes.

"My team are busy collecting witness accounts and recovering vital CCTV footage of the burglary at the store and of the suspects leaving the scene.

"I'd like to appeal for those who may have been in the area at the time and saw the individuals involved, either at the scene or fleeing, to get in touch with police and send us any images and footage that they may have."