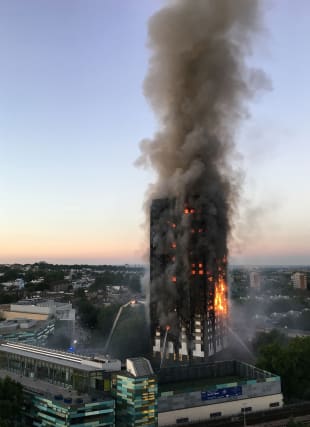 The first senior police officer to arrive at the Grenfell Tower fire took just “half a second” to declare it a major incident after seeing flames coming from a flat window like a “jet engine”, the public inquiry has heard.

Inspector Nicholas Thatcher said he was not alarmed when he was first made aware of the blaze as the initial call came over the radio at just before 1am on June 14 last year.

But an officer on the ground suggested a “massive evacuation” was required and declared a critical incident as Mr Thatcher drove to the west London tower block, where a total of 72 people died as a result of the fire.

On Monday, Mr Thatcher who has 24 years’ experience in the police, told how he took the decision to declare a major incident at 1.26am as he saw “a housing estate and the sky on fire”.

“I saw the fire for the first time and it was the intensity. It was like a jet engine coming out of this window and starting to go up the side… It was just like nothing I had ever seen,” he said.

“It’s a massive call to make. It took about half a second,” he continued.

“When you are looking at something, if you act people might die and if you don’t people will die, you have clarity.”

In a witness statement made on June 27 last year, Mr Thatcher told of his difficulty in forcing himself to concentrate on the detail of the events and look at footage recorded on his body-worn camera.

One clip played at the inquiry showed images of the 24-story building on fire in the distance as the Metropolitan Police officer briefed a colleague.

“All of my actions and decisions that night were taken against the back drop of imminent death, all the time I was within the area that was eventually cordoned I fully expected the building to collapse resulting in my death and the death of the officers and public around me,” he said in the statement.

“In the same vein I was mindful of lessons learned as a result of the Twin Towers collapsing in New York. I accept that that incident was far greater in scale than Grenfell Tower but the lessons were still relevant.”

Describing the scenes in his statement, he added: “I could only see one or two people who were walking but coughing, this was worrying as I should have seen hundreds of people.

“At this point my priorities were to save human life, both inside and outside the tower.”

Asked if he thought at the time the building should have been evacuated, he said: “In terms of going into the fire brigade and saying, ‘you need to evacuate this building’, they are the experts. Yes, it was a concern, but they’re the experts.

“I never thought I need to go to the fire brigade and say, ‘you need to evacuate this building’. As the training was, you talk to them, you find out what they need and you do your best to allow them to do their job.”

The officer admitted part of a policy to ensure emergency services were all aware a major incident had been declared was not carried out but insisted it had not made a difference to the response.

“What I experienced on that night was one of the finest examples of teamwork I have ever been involved in,” he said.

“If you think what happened in those hours, between arriving to half a dozen fire engines and 20 coppers, and what we left, it was amazing, it was really amazing,” he said.

“Yes, the niceties are missing, but the niceties weren’t important. What was important was something happened and we had to bloody well move or people would die.”

The public inquiry is in its first phase at Holborn Bars in central London.