Commuting to and from work taking longer, TUC study suggests 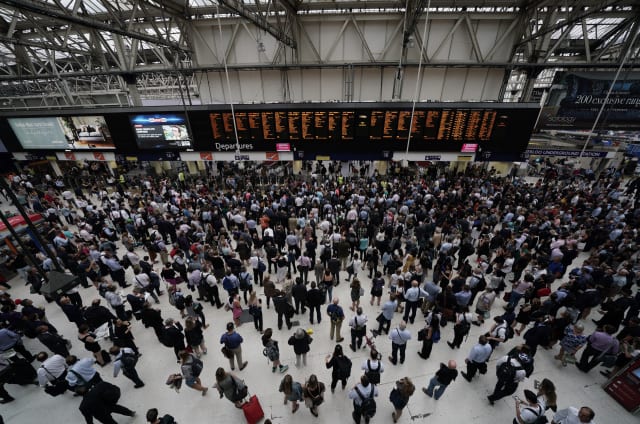 Commuting to and from work is getting longer, with rail passengers taking an average of over two hours a day travelling to and from the office, according to a new study.

Research by the TUC suggested that all forms of travel was taking longer than a decade ago.

Rail commuters face the longest journeys of an average two hours and 11 minutes a day, an increase of four minutes on 10 years ago, drivers spend an average of 52 minutes, up three minutes, and bus users take 79 minutes a day getting to and from work, seven minutes more than a decade ago, said the TUC.

Even the quickest forms of commuting were taking longer – cycling up by six minutes to 44 minutes a day and walking by two minutes to 29, said the TUC.

The union organisation blamed the increased commuting times on low government spending on transport, employers not offering flexible or home-working and people not able to afford houses close to where they worked.

Black and ethnic minority people spent longer commuting than others, partly because they have lower pay and were more likely to take long bus journeys rather than faster options, said the report.

TUC general secretary Frances O’Grady said: “It’s great we’re investing in high-speed rail between some of our major cities, but people more often use their local buses and trains on their daily commute. These need to be upgraded too.

“Privatisation of trains and buses is a big failure. Journeys are too expensive, too slow and too unreliable. We should bring services back into public ownership. And cuts to public funding for bus routes should be reversed.

“Employers can make a difference too. Home working and flexitime can cut journeys and help avoid the rush hour. If staff have fewer stressful journeys, they can focus better on their work.”

Phil Flaxton, chief executive of Work Wise UK, which campaigns for flexible working, said: “Long commutes have become a part of the UK’s working culture, but the excessive time spent commuting is one of the main factors contributing to work-life balance problems.

“Not only is the time spent commuting an issue, the nine to five culture with its peak travel times generates congestion and the rush-hours on railways, underground and road networks increase stress for commuters.”

Mick Cash, general secretary of the Rail, Maritime and Transport union, said: “Britain’s commuters, robbed blind by greedy private train companies, are being forced to travel greater distances as they are priced out of our towns and cities.

“They are a captive market being exploited for shareholder gain. It’s a national scandal and the only solution is public ownership.”

A Department for Transport spokeswoman said: “We know commuters want to make their journey as quickly and comfortably as possible. That’s why we’re investing more than £48 billion into our railways to cut journey times, increase service frequency and introduce new trains.

“We are also giving councils extra powers to work in partnership with bus companies to improve services, and we are investing more in improving our roads than at any time before.”