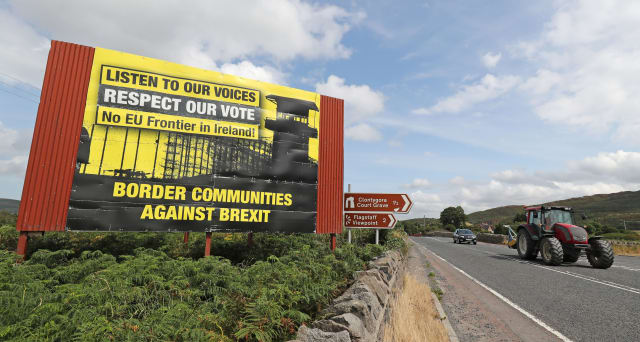 Theresa May faced a fresh Brexit headache as her plans risked a rift with her Democratic Unionist Party allies.

DUP leader Arlene Foster said the Prime Minister appeared “wedded to the idea of a border down the Irish Sea” despite Downing Street’s assurances to the contrary.

The European Union’s fallback proposal aimed at avoiding a hard border between Ireland and the UK would effectively keep Northern Ireland aligned with Brussels’s customs union and single market.

A leaked letter from the Prime Minister to Mrs Foster and her deputy Nigel Dodds set out Mrs May’s approach.

She wants a “backstop” measure which would create a temporary “joint customs territory” with the EU for the whole of the UK.

But Brussels appears set to insist on a Northern Ireland-only “backstop to the backstop” in case negotiations on a wider UK approach break down.

In the letter, obtained by The Times, Mrs May said: “I am clear that I could not accept there being any circumstances or conditions in which that ‘backstop to the backstop’, which would break up the UK customs territory, could come in to force.”

But the DUP has interpreted the wording of her letter to mean that the measure will be contained in the Brexit divorce deal despite Mrs May’s insistence it will never come into effect.

Mrs Foster said: “The Prime Minister’s letter raises alarm bells for those who value the integrity of our precious union and for those who want a proper Brexit for the whole of the UK.

“It appears the Prime Minister is wedded to the idea of a border down the Irish Sea with Northern Ireland in the EU single market regulatory regime.”

The Prime Minister relies on the support of the DUP’s 10 MPs for her Commons majority, votes which may become crucial as she attempts to get a deal through Parliament.

A Downing Street spokesman said: “The Prime Minister’s letter sets out her commitment, which she has been absolutely clear about on any number of occasions, to never accepting any circumstances in which the UK is divided into two customs territories.

“The Government will not agree anything that brings about a hard border on the island of Ireland.”

Any version of the backstop would apply unless and until a wider UK-EU deal on the future relationship solved the issue of how to avoid a hard border with Ireland.

Brexit is expected to dominate the agenda of the British Irish Council, which also involves the first ministers of Scotland and Wales, Nicola Sturgeon and Carwyn Jones.

Downing Street has played down suggestions that a Brexit deal is imminent, after European Council president Donald Tusk appeared to indicate a breakthrough could come within the next week.

A senior UK Government source said that reports in the European media that a deal could come in the next few days should be taken “with a very large pinch of salt”.

A potential sticking point could be demands for EU fishing fleets to be given continued access to British coastal waters as the price for agreeing to Mrs May’s UK-wide backstop, the Daily Telegraph reported.

A UK-wide customs deal would maintain quota-free and tariff-free access to European markets for the British fishing industry and in return the EU wants to keep continued access to UK waters for its trawlers, the newspaper said.