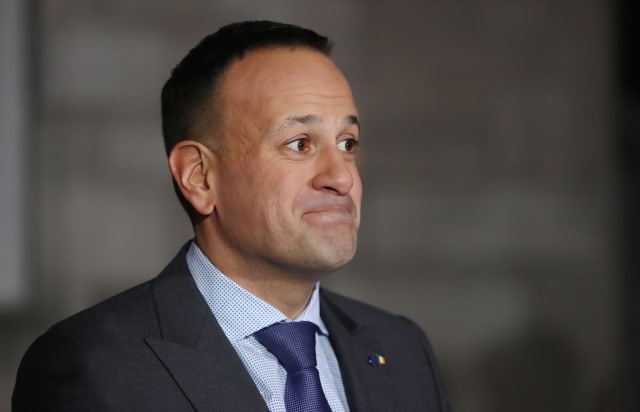 Taoiseach Leo Varadkar has reaffirmed his position on the Irish backstop after being accused of a “cock-up” by Sinn Fein.

The Irish leader was accused during Leader’s Questions on Tuesday of “losing his nerve” after telling Prime Minister Theresa May on Monday that he would be open to a review process of the backstop post Brexit.

“Yesterday when you said you were willing to consider a review clause, you shifted your position,” Mary Lou McDonald said.

“I think your announcement yesterday was a cock-up plain and simply.

“Brexit is for keeps and to combat those real life consequences, there can be nothing time bound or temporary, and not couched in ifs and buts.

She asked the Taoiseach to clarify the position of the Irish government and invited him to set aside any notion of a review clause of the backstop.

Mr Varadkar said he had committed to nothing, but was open to creative solutions to ensure a smooth transition for the UK leaving the EU.

“There can be no expiry date and there can be no unilateral exit clause, and if it were to be either of those things, the backstop would not be worth the paper it was written on,” he said.

“If we do have a backstop and if it is used, it may be to our advantage or necessary to have a review – which is very different to the exit clause that would let the UK withdraw, and that has been Irish government stance all along.

“In order to get to an agreement, we need to be creative around solutions and language, there would be no Good Friday Agreement without John Hume and Seamus Mallon, David Trimble and even Gerry Adams understanding that.

“I’m open to creative solutions and creative language but we will not resile from our fundamental resolution, the backstop cannot have a time limit or an exit clause.”

Ms McDonald questioned whether Mr Varadkar had “lost his nerve” at a critical time in Brexit negotiations.

She said: “Your timing couldn’t be worse, we urged you not to blink in dealing with the Tories, to stay the course in what are very reasonable bottom lines, you say we need no expiry date and yet you countenance review mechanisms, that serves to muddy the waters.

“I don’t know if you have lost your nerve, I hope for sake of country you haven’t.

“How on earth at such sensitive time in negotiations would you commit to review clause?

“How could you commit yourself to that, when you don’t, in fact, know what it would amount to?” she asked.

Mr Varadkar reaffirmed his stance, repeating much of his first answer before directing his attention to Ms McDonald herself.

He said: “I’ve committed to nothing. I’m open to considering a review clause but I’ve set out what it could not contain, an expiry date or unilateral ability of the UK to withdraw on a hard border.

“It is a very good thing you’re not leading these negotiations, you’re too extreme, too uncompromising, too bullying – you would turn friends into enemies over the next few months.”