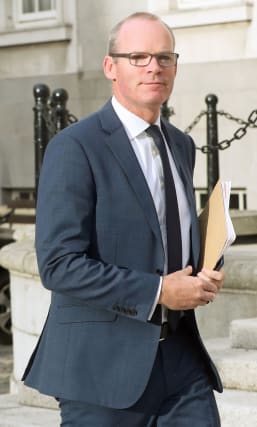 Ireland’s deputy premier has said strong UK-Irish friendship is more important than ever ahead of talks between senior Irish and UK Government ministers in Dublin.

Tanaiste and Foreign Affairs Minister Simon Coveney and the country’s Justice Minister Charlie Flanagan are set to welcome UK Minister for the Cabinet Office David Lidington and Secretary of State for Northern Ireland Karen Bradley at a meeting of the British-Irish Intergovernmental Conference (BIIGC) in Dublin’s Iveagh House.

In a tweet Mr Coveney said: “Looking forward to welcoming @DLidington [and] Karen Bradley to Dublin for British Irish Intergovernmental conference with me [and] @CharlieFlanagan.”

The conference comes as Brexit Secretary Dominic Raab arrived in Northern Ireland on Friday morning for a one-day visit to the region. He was due to visit Stormont to meet with local political parties.

Powersharing government at Stormont has been collapsed since January 2017 following a breakdown in relations between the Democratic Unionists and Sinn Fein.

A meeting between Ms Bradley and Northern Ireland’s main political parties in Belfast on Thursday to discuss the re-establishment of formal powersharing was branded a “waste of time” by SDLP leader Colum Eastwood.

Four of the five parties expressed frustration after the meeting and they pressed Ms Bradley to convene multi-party talks.

Established under the Good Friday Agreement in 1998, the BIIGC focuses on bilateral agreement between the two countries.

Brexit negotiations and the absence of power-sharing in Northern Ireland are set to be top of the agenda of this conference.

North/South Security Co-operation and bilateral co-operation between the British and Irish Governments will also be discussed.

The last meeting of the BIIGC took place in July.

In a statement ahead of the meeting, Mr Coveney said it showed the shared determination of both governments to get all of the institutions of the Good Friday Agreement operating effectively again as soon as possible.

“It also demonstrates that, despite the current challenges, both the Irish and UK governments are committed to developing the relationship between our countries and looking at ways to maintain and deepen our engagement,” Mr Coveney continued.

Mr Flanagan said the meeting represented an important opportunity for the two governments to discuss their shared security concerns.

“We have common cause in combating the threat from paramilitaries who continue to reject the Good Friday Agreement,” Mr Flanagan said.

“While considerable progress has been made on the security front, the need for continued action against paramilitaries and ongoing vigilance remains.”

Earlier this week Ms Bradley told the House of Commons that she was “actively considering” how and when an external mediator could play a “constructive” role in attempts to re-establish talks. She told MPs she would raise the idea with the Irish Government during Friday’s conference.