Two government pathologists in biohazard suits lean over the body of something unmistakably alien– cutting the creature open in gruesome detail.

The 1995 Alien Autopsy video was shown in 33 countries and watched by 12 million people – many of whom believed it was real for decades.

Now the film-maker (and ex-magician) behind it revealed how the 'Alien Autopsy' film fooled the world.

Spyros Melaris told The Sun that the film claiming to show an alien body being examined in 1947 actually shows a foam body filled with cow and lamb organs from a local butcher.

Melaris said that he considered using raspberry jelly for the 'brain' but rejected it as 'too dark' as he filmed in a north London flat in 1995. 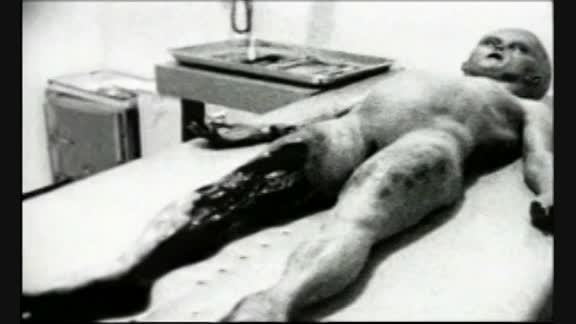 He spliced his film footage onto a 1947 Pathe newsreel to fool experts at Kodak – and a documentary on the film aired three times on Fox, being viewed by 11.7 million people.

Merlaris said, 'Our whole film was made up but we hung it on little elements of truth.

Christmas getaway chaos: These are the areas set to be worst affected by rail disruption
Top cop urges police to focus on burglaries and violent crime rather than wolf whistling
Fireworks thrown at blind woman and guide dog as they walked through Leeds park
Watch: First footage offers proof of supermassive black hole lurking at the heart of the Milky Way
CCTV footage shows person breaking into ambulance while crew treated a patient

​​​​​​'Something crashed in Roswell and we pinned the film on this being a body that could have been picked up in that crash.'

Ray Santilli claimed to have received it from a cameraman who worked at Roswell – and it was broadcast on television in 33 countries.

In 2006, Santilli admitted it was fake – but said that it is a 'staged reconstruction' of a genuine alien dissection film he had been shown in 1992.

Melaris says it took him years to realise that Ray Santilli, who financed the film, had actually made millions from it.

He now plans to write his own tell-all book.

'Indeed, they can be regarded as part of an American folklore tradition that stretches back to 1897 when newspapers reported stories of 'airships' invading the skies and in some cases crashing. The most famous one refers to a crash of an alien spaceship in Aurora, Texas, which was obviously a made-up story that cashed in on this craze. This hasn't stopped ufologists searching for the alleged grave of the Martian who was found inside this craft.