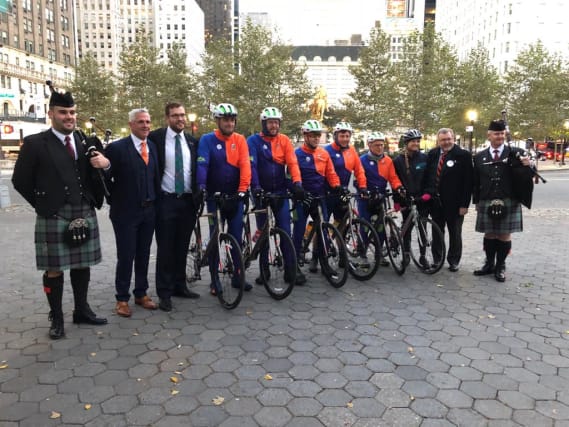 The Scottish Secretary has met cyclists on the final stage of their journey from Lockerbie to Syracuse in the United States as the 30th anniversary of the bombing approaches.

Pan Am flight 103 was on its way from London to New York when it exploded above Lockerbie on the evening of December 21, 1988, killing 259 people on board and 11 people on the ground.

David Mundell is in the United States to visit Syracuse University which lost 35 students in the atrocity in 1988, and to take part in the annual remembrance week at the institution.

He was in New York on Tuesday to wave off a group of five charity cyclists on the third and final stage of their 3,238-mile journey from Lockerbie to Syracuse to remember those who died.

Mr Mundell said: “This is a really important way of marking the 30th anniversary of the Lockerbie bombing.

“It is about respecting and remembering those people who died that night, but also looking forward to strengthening and deepening the relationship that’s grown up between Lockerbie and Syracuse.

“It has been very moving for me personally to see off the Cycle to Syracuse cyclists from New York City on the final leg of their journey to Syracuse University.

“A journey that has taken them round schools in the Lockerbie area and up to Edinburgh, and across the USA.”

Cycle team leader Colin Dorrance, who was a young off-duty police officer on the night of the bombing, has described the prospect of completing the ride in the US as “exciting, humbling and moving”.

The first stage of the journey involved local pupils riding exercise bikes or their own bike at school, while the second stage saw more than 100 people cycle from Lockerbie to Edinburgh on October 13.

For the third and final stage the core group of five cyclists travelled to the US to complete the Arlington to Syracuse leg of the journey.

The journey from Lockerbie Academy to Syracuse University in New York state covers 3,238 miles, with the distance cycled totalling around 672 miles.

As well as remembering the 270 people who died the cycle ride is also raising money for Soul Soup, a local youth mental health charity.