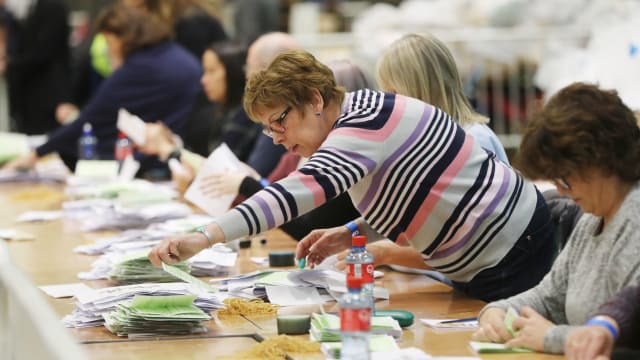 Michael D Higgins is leading in the presidential election results with only a few constituencies left to complete their first counts.

Mr Higgins looks set to secure a second term as Irish president with a landslide margin as counting in the election continues.

Galway East was the first constituency to announce its results at around 2.30pm with 34 constituencies since being declared.

While Mr Higgins is on course for a potentially historic winning tally – with exit polls suggesting a vote over 56% – much focus in the early stages of the count is on the contender set to come second: controversial businessman Peter Casey.

Mr Casey’s vote appears to have surged on the back of his critical comments about the Travelling community and assertions that Ireland has a culture of welfare dependency.

Sinn Fein on the other hand look on course for a disappointing result, with candidate Ms Ni Riada potentially only going to secure half of the support achieved by the late Martin McGuinness in 2011.

Mr Higgins’ communications director Bernard Harbour said the exit polls demonstrated that people were very happy with how the president had conducted himself in his first seven years in office.

His support had been as low as 1% in opinion polls in the early stages of the campaign but his vote appears to have rocketed after what rivals characterised as a “populist” move to criticise Travellers and welfare recipients.

Mr Casey denied those controversial comments were the reason for his apparent vote surge, though said if he had won the election he would have advocated moving members of the Travelling community into Dublin’s vast Phoenix Park.

The millionaire said his advocacy for “middle Ireland” – people who are struggling to pay bills and get on the housing ladder – resonated with the voters.

Speaking at Dublin Castle, Mr Casey refuted once again that he had used the racist card to gain his vote.

“You can’t be a racist if you don’t regard the people you are talking to as a different race,” he said. “They’re not. They’re Irish and they’re proud Irish people so that’s not possible really.”

Mr Casey hinted he might now turn his focus to securing another elected office, potentially in the Dail.

“I have had about 30 minutes over coffee with my wife this morning, I think we need to sit down, take stock and make a decision very shortly,” he said.

Mr Casey said he was “still waiting on the Taoiseach to apologise” for asking people not to vote for him in the election.

He said it was “disgraceful” Leo Varadkar had called on the public not to vote for him over his comments on the Traveller community.

Staff at 28 count centres across the country began sorting and collating the ballot papers at 9am.

Turnout in the election was low.

If the exit polls are correct, Mr Higgins is likely to be easily re-elected on the first count for a second seven-year term.

If he secures more than 56.3% of the vote he will record the highest ever winning percentage in a presidential election.

That would be all the more remarkable given it was a six-horse race – the 56.3% won by Eamon de Valera in 1959 was in a two-way contest.

More than 3,400 people were interviewed for the RTE poll by Red C outside 138 polling stations across the country on Friday.

The Irish Times poll, conducted by Ipsos/MRBI, questioned more than 4,300 voters outside 160 polling stations across the country.

The results of both polls, which were published when polling stations across the country closed on Friday night, indicate Mr Duffy, the third Dragon in the race, secured the lowest number of votes at 2%.

More than 3.2 million people were entitled to vote in 40 constituencies across the country.

As well as deciding who they wanted to see in the president’s residence at Aras an Uachtarain for the next seven years, the electorate was also asked whether they wanted to remove the offence of blasphemy from the Irish constitution.

The exit polls suggest the referendum will be passed by a significant majority.

RTE’s exit poll found 71.1% said they voted Yes and 26.3% voted No, while the Irish Times poll predicted 69% backed the proposal and 31% voted against the change.

Mr Higgins is the country’s ninth president. He was elected in 2011.

If re-elected, the poet will become the fifth president to serve for two terms.

A result is expected by Saturday evening.