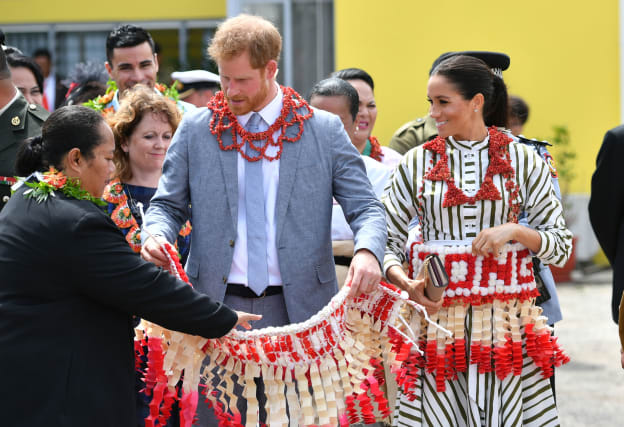 The Duke and Duchess of Sussex donned floral garlands and traditional Tongan dress as they immersed themselves in the culture of the South Pacific nation.

Harry and Meghan had powerful-smelling flowers tied around their necks as they were welcomed to an exhibition of Tongan youth projects and handicrafts.

They were also given a ta’ovala – a woven mat wrapped around the waist – which signifies Tongan respect to the higher ranks.

The couple, who arrived in Tonga from Fiji on Thursday, joined Princess Angelika and Prince Ata, King Tupou VI’s son and daughter, at the Fa’onelua Centre, which showcased products including traditional mats and “tapa” cloth, carvings, bracelets made from whale bone and wood.

Inside, they sat on two throne-like chairs in the centre of the room while Princess Angelika delivered a short address after prayer was read.

The princess said the royal couple were “an inspiration to the youth of the Commonwealth” for “shining a light on youth empowerment”, adding that their historic visit to what Captain James Cook called Friendly Islands had inspired the youth in Tonga to be “the best they can be”.

She said the “historical highlight” in relations between Britain and Tonga had been the Queen’s visit to the island in 1953.

She added: “Your visit today draws attention to the fundamentals of today’s youth, youth leadership, youth empowerment and addressing the social, economic and environmental challenges of our region.

“Your visits inspires and has been an inspiration for the youth of Tonga to be the best they can be.

“You are a beacon of hope to us all.”

Harry and Meghan – who was wearing a striped Martin Grant dress – went on to meet local Tongan traders and craftsmen as the Masani group of singers and dancers performed island music and songs.

The duke appeared to do a little jig as the music started.

The couple were given a picture of the Royal Tongan Motif, Fata O Tu’i Tongan.

Artisan Uili Lousi said: “They said they will put it in their home.”

They were met by more than 50 civil servants wearing red and black shirts and traditional outfits as they entered the St George Government Buildings.

One child held a sign saying “free hugs”, which Meghan spotted and smiled at.

The Sussexes went on to Tupou College where they will dedicate two forest reserves to the Queen’s Commonwealth Canopy before leaving from Fua’amotu airport for Sydney.

The duke and duchess will attend the Australian Geographic Society Awards at the Shangri-La Hotel on Friday evening.