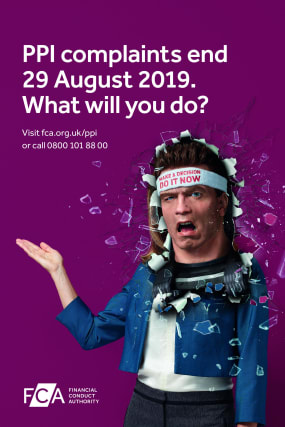 A PPI awareness campaign featuring Arnold Schwarzenegger’s animatronic head has been a success, with more people now complaining themselves, according to the City regulator.

In a progress update, the Financial Conduct Authority (FCA) said there has been a clear increase in consumer action and people’s awareness of the deadline for making a complaint on August 29 2019 has been raised.

It said the campaign has improved people’s understanding of the insurance and led to fewer using a claims management firm.

PPI (payment protection insurance) was meant to help people keep up with loan repayments if they became ill or unemployed but it was often added on to credit cards, mortgages or other loans without people wanting or needing it.

Jonathan Davidson, executive director of supervision, retail and authorisations, said: “We are encouraged by the results of the first 10 months of the campaign.

“However, with less than a year until the deadline, we will carry on working hard to ensure every consumer has had the chance to make a decision on whether to complain about PPI.

“Since 2011, more than £30 billion in redress has been received by consumers.”

The FCA said 73% of people now recognise the campaign and more than two million people have visited the FCA PPI website since the campaign launched.

Some 3.7 million complaints have been made, 63% up on the 10 months before the campaign.

The FCA also said more consumers are complaining themselves instead of going to claims management companies, which will take a chunk of any payout.

More than half (55%) of complaints have been made directly by consumers, compared to 45% before the campaign.

It said £3.7 billion of redress has been paid since the start of the campaign, a 64% increase on the previous 10 months.

The FCA said firms have improved accessibility of their PPI pages, presented information in a more engaging and accessible way and taken proactive steps to improve information for vulnerable consumers.

Mr Davidson added: “Where we have seen firms failing to meet the standards we expect, we have challenged them to make improvements.”

The FCA said as the campaign moves into the second year, it aims to continue the positive trend of improved understanding of PPI, the deadline for complaining and what to do, particularly among black, ethnic minority and disabled consumers.

It said the focus will be on strengthening consumers’ understanding of what to do before the deadline and how to make a PPI complaint.

Following the deadline, the FCA will publish a final report in early 2020 – drawing the PPI issue to a close.