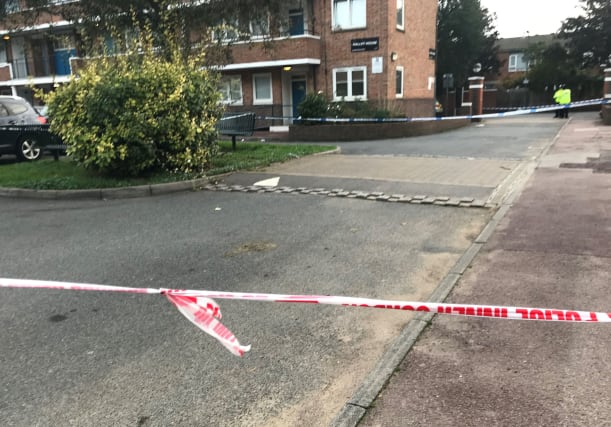 An 18-year-old who was fatally stabbed on a south-east London estate on Monday night was found outside a party, a resident has said.

A woman who was at her grandson’s birthday party in Greenwich said she saw the teenager, who she did not know, “lying on the floor dead” outside her daughter’s flat.

Her granddaughter, who also lives on the Flamsteed Estate, gave the young man CPR but “she couldn’t bring him back”, the woman said.

Attempting to revive the victim left her traumatised, she added.

“She was crying last night – she was so upset,” said the grandmother, who has lived on the estate for 27 years.

Police said the teenager was reportedly seen arguing with three men on mopeds in Armitage Road before the attack.

They were called to the road at 9.25pm to reports of a disturbance, Scotland Yard said.

Other residents said they heard screaming and shouting before the police arrived.

One, who did not wish to be named, said: “I heard some screaming and shouting and thought I heard some dogs barking, but basically that is what I hear every single day.”

The victim has not yet been identified.

homicide and major crime command, said: “We know that several people reported eeing the victim in a confrontation with three other males on mopeds before an altercation in which he sustained his injuries.

“The males then rode away from the scene.

“I need anyone who may have information that could assist us to make contact as quickly as possible.”

A crime scene is still in place and forensics officers are examining the area.

Formal identification of the victim has not yet taken place and a post-mortem examination will be held in due course.

Anyone with information is asked to contact police on 101 quoting CAD 7560/22 October, or alternatively contact Crimestoppers anonymously on 0800 555 111.