Uber to raise fares to pay for electric cars 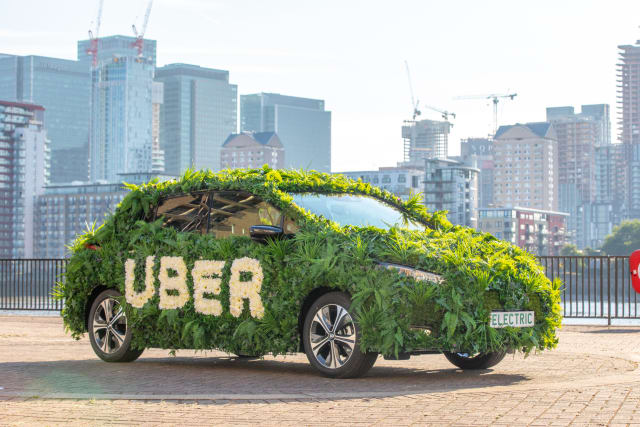 Uber is to raise fares in London to help drivers buy electric cars.

The firm expects this to raise more than £200 million over the next few years, which will be used to help drivers convert to electric cars.

A driver using the app for an average of 40 hours per week will be given around £3,000 towards the purchase cost of such a vehicle in two years, or £4,500 in three years.

Uber expects the clean air fee to be around 45p for an average trip.

There are currently around 45,000 Uber drivers in the capital.

Speaking at a press briefing in the City of London, chief executive Dara Khosrowshahi said the firm’s clean air plan is “the first of its kind for Uber around the world”.

He claimed it demonstrates Uber’s ambition to create a “trailblazing partnership” with London to support Mayor Sadiq Khan’s attempts to cut pollution, which is an issue that “every great city in the world is struggling with”.

He went on: “The Mayor of London has set out a bold vision to tackle air pollution in the capital and we’re determined to do everything we can to back it.

“Our £200 million clean air plan is a long-term investment in the future of London aimed at going all electric in the capital in 2025.

“Over time, it’s our goal to help people replace their car with their phone by offering a range of mobility options – whether cars, bikes, scooters or public transport – all in the Uber app.”

Mr Khan introduced a £10 toxicity charge for older, more polluting vehicles in the centre of the capital in October 2017.

This will be superseded by an Ultra Low Emission Zone which will create stricter emissions standards for diesel vehicles at all times from April 2019.

In June, a judge granted Uber a short-term operating licence in London after its permit was initially not renewed over safety concerns.

The firm conceded it had made “serious mistakes” and that Transport for London (TfL) was correct in its renewal decision, but told an appeal hearing it had made “wholesale” reforms.

Mr Khosrowshahi said coming to London in October last year to discuss the licence issue with TfL bosses was a “scary first thing to take on” after becoming chief executive weeks earlier.

He met London’s transport officials again on Monday with an ambition of “radically improving communications” and acting like a “strong global partner”.

He added: “We’re by no means complete in our ambitions and complete in moving the company to a better place, but I think we’re in a much better spot.”