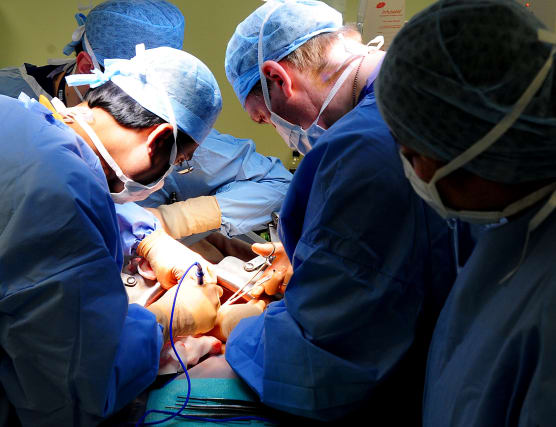 Jeane Freeman has announced more than £650 million of additional funding will be used to try to cut NHS waiting times after telling MSPs: “Some people are waiting too long to receive the care they need.”

The Health Secretary outlined a phased action plan she said would deliver a “sustainable and significant step change in waiting times” over the next two an a half years.

She took action after the Scottish Government had come under repeated fire for its failure to meet NHS waiting times standards.

SNP ministers had introduced laws creating a legally binding 12-week Treatment Time Guarantee for those who require either inpatient or day surgery.

In the period of April to June this year, this was met for just less than three quarters (74.6%) of patients.

Tory health spokesman Miles Briggs said: “The fact is that the treatment time guarantee, legislated for all the way back in 2012, has never been met.

“Now the SNP has publicly accepted that it has failed to deliver on promises made to patients across Scotland.

“Far more is needed to address Scotland’s NHS workforce crisis, and year after year, the SNP proves it is not up to the job.”

Ms Freeman pledged that by October 2020, 85% of people needing to go into hospital either would wait less than 12 weeks, with the commitment to be met for 100% of days and inpatients by the spring of 2021.

She also said the Scottish Government’s target of having 95% of patients where cancer is suspected start their treatment within 62 days would be met by this time.

The Health Secretary told MSPs the improvement plan was focused on reducing the “length of time people are waiting for key areas of health care”.

She stated: “Simply put, some people are waiting too long to receive the care they need.”

Ms Freeman said £535 million of resource spending and £121 million of capital investment would be used “over the next two and a half years to make a sustainable and significant step change in waiting times”.

That money is on top of £200 million being spent on new elective treatment centres, with work on these to be accelerated where possible.

In addition a new CT scanner should operating at the Golden Jubilee Hospital in Clydebank from 2019, while Forth Valley Hospital in Larbert will get two more theatres and extra MRI capacity by the middle of next year, the Health Secretary said.

She also promised the improvement plan would build on work to increase NHS staffing, saying while this had grown for the last six years in a row, there were still “key staffing constraints”.

To help with this Ms Freeman promised £4 million would be spent over three years on a domestic and international recruitment campaign for GPs, nursing and midwifery staff and consultants, focusing on specialities with the highest vacancy rates.

She said: “Our central aim is to significantly improve the experience of patients waiting to be seen or treated.

“Solutions will be different in different areas of the country and in different specialities – but the drive for improvement will be national in scope.

“Achieving this will require a focused, intense programme of work that accelerates action that is already underway.”

Labour health spokeswoman Monica Lennon said extra investment in the NHS was “desperately needed”, adding: “This government gave patients a legal right to treatment within 12 weeks, however that law has been broken 150,000 times.”

“Is it the government’s intention to keep on breaking it’s own law til 2021?”

Chair Dr Lewis Morrison said that despite “repeated warnings from doctors and other health professionals”, the Scottish Government had “simply reaffirmed its commitment to the current politically set targets that are putting so much pressure on NHS staff and services”.

He said: “There are real dangers that inappropriate targets can skew clinical decisions and simply carrying on with existing approaches will do nothing to alleviate the extreme pressure that doctors and other NHS staff are working under.

“Decisions over the treatment of patients should always be based solely upon clinical need. While the measures and indicators used to track targets provide insight into how the NHS is functioning, there needs to be far more maturity about how we respond to such information.

“It is also concerning that there is little of substance in these plans on how the Scottish Government intends to address the medical recruitment and retention problems being faced across Scotland.”