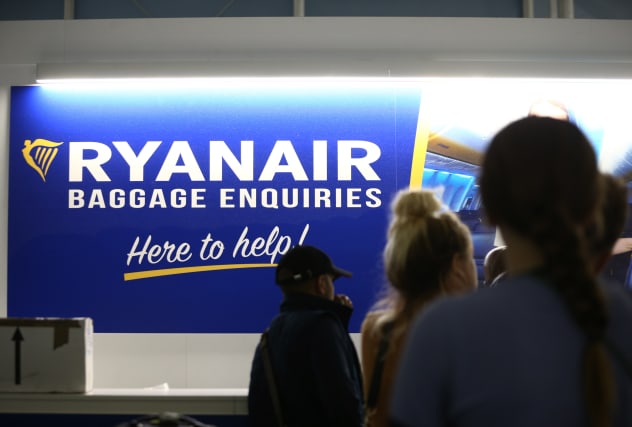 Ryanair has reported a dip in half year profits after the budget airline was stung by higher fuel costs and compensation payouts linked to flight delays and cancellations.

The Irish carrier booked a 9% decline in pre-tax profits to 1.3 billion euros £1.1 billion) in the six months to September 30.

Ryanair, which was forced to issue a profit warning earlier this month, said higher fuel and staff and compensation costs offset strong revenue growth, which rose 8% to 4.79 billion euros (£4.2 billion).

The budget airline added that average fares declined 3% due to excess capacity in Europe, an earlier Easter in the first quarter, and repeated strikes and staff shortages which caused a spike in cancellations of higher fare, weekend flights.

Ryanair has also been stung by pilot and cabin crew strikes, knocking passenger numbers and resulting in hefty compensation costs.

It has also hit customer confidence in the company, with passengers making fewer forward bookings into the third quarter including for the October school half-term and Christmas.

“Our traffic, which was repeatedly impacted by the worst summer of ATC (air traffic control) disruptions on record, grew 6% at an unchanged 96% load factor.”

“We have trimmed winter capacity by 1% (including base closures in Eindhoven and Bremen) in response to weaker fares and higher oil prices.”

Looking ahead, Ryanair said it now expects annual traffic growth of 6% to 138 million passengers – slightly down on previous guidance of 139 million – following a 1% reduction in winter capacity.

The airline’s fuel bill is expected to come in about 460 million euros higher year-on-year.

Ryanair said that its profit guidance remains heavily dependent on air fares not declining further, and the absence of unforeseen strikes and negative Brexit developments.

“The risk of a hard (“no-deal”) Brexit in March 2019 is rising. While we hope that a 21-month transition agreement from March 2019 to December 2020 will be implemented (and extended), we remain concerned that the time to complete such an agreement is shortening,” Mr O’Leary added.