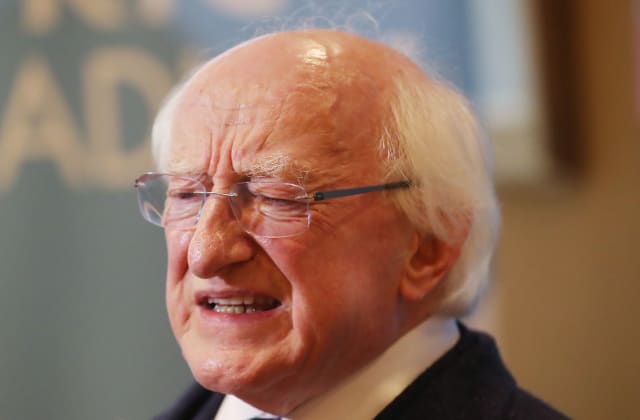 Irish President Michael D Higgins has claimed that he had to travel to Belfast by private jet following advice from his office on security issues.

Mr Higgins said he was grateful for the statement released by the Police Service of Northern Ireland (PSNI) which disputed his earlier claims that he travelled by jet because police in Northern Ireland could not provide security for him by road.

He said: “As far as I am concerned I am very happy with the official PSNI statement. I welcome it, I agree with it and I am happy to reciprocate to it by again expressing my thanks for their co-operation and courtesy.”

Mr Higgins was asked for clarity over his previous comments that his staff were advised “that for security reasons I couldn’t be picked up at the border” during last May’s trip.

He made the comments during a televised presidential debate on Wednesday evening.

“I have visited Northern Ireland many times in the last seven years and I take the advice from my office and my office judges these trips in terms of – the considerations they take into account are logistics and security,” he added.

Mr Higgins was speaking as he launched his Shared Ireland, Shared Island initiative at the Droichead Arts Centre on Monday, days before the public go to the polls for the presidential election.

Helping him launch the campaign was one of the architects of the Good Friday Agreement, Seamus Mallon.

The former SDLP deputy first minister introduced Mr Higgins and praised him for his previous seven years in office.

Sinn Fein presidential candidate Liadh Ni Riada said she sent Mr Higgins a letter calling for him to respond to a number of “serious questions” ahead of Tuesday night’s televised debate.

She posted on her Twitter account: “It is my strong view that discussing these issues publicly is the only means left to reassure our citizens that public finances are being properly used, particularly at a time of huge difficulties for many families.”

Mr Higgins told the crowd at Droichead Arts Centre, which included SDLP leader Colum Eastwood and former leader Mark Durkan, that he was operating the campaign under the constraints of being a president in office.

He said that if he is re-elected, he will launch a new initiative which he hopes will “spark an inclusive, respectful discussion on how all of us can live together and how we can treat our differences with respect”.

“In our interpretation of the past, we do so in a way recognising that it bears on how we are living in the present and what we might do together in the future,” he added.

“We must differ, yes we will differ but we must do so with the necessary courtesies of a republican discourse.”

On Monday morning, presidential candidate Peter Casey posted a video on his Twitter account which criticised the president’s Bernese mountain dogs and claimed that the president was using public money to cover grooming costs.

Mr Higgins said he wanted to assure the Irish public that his dogs “are well”.

“I walked with them last night and they were looking particularly well,” he added.

“I cover the costs of my dogs, be it their food or veterinary or grooming.

“I would recommend people get a dog, it’s a good thing.”

Mr Mallon introduced the president and used the opportunity to hit out at the ongoing Brexit negotiations.

He said that the Good Friday Agreement defines the British government’s role as to provide for agreement between the people of Northern Ireland.

“At the heart of it is two sovereign governments dealing with a problem which has been with us for at least five centuries,” he added.

“It is very low indeed because the British government has chosen not to work the Good Friday Agreement in terms of the British Irish Governmental arrangements,” he added.

“It has chosen not to copper-fasten that relationship with the island of Ireland but to replace a sovereign Irish government with eight members of the DUP.”