RBS, Lloyds and Barclays to report in bumper week for banks 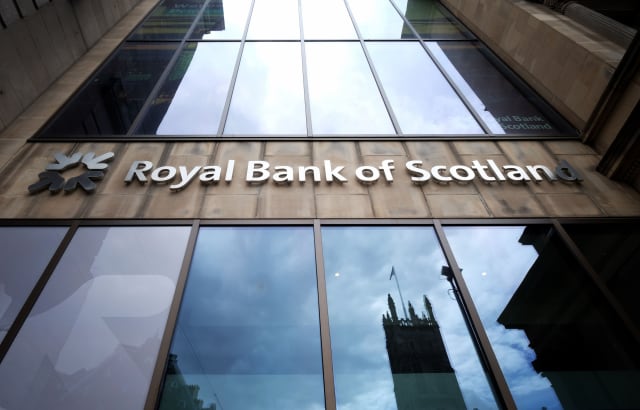 Royal Bank of Scotland is expected to post higher profits next week amid a drop in litigation and conduct charges, as it releases results alongside banking peers Barclays and Lloyds.

A consensus of City analysts is forecasting a rise in attributable profits to £507 million for the three months to September, up from £392 million a year earlier.

The banking giant is set to benefit in part from a drop in conduct and litigation costs, which are believed to have shrunk to around £83 million from £125 million during the same period in 2017.

RBS earlier this month paid out its first dividend in 10 years, after reaching a long-awaited 4.9 billion US dollar (£3.7 billion) settlement with US regulators over claims it mis-sold mortgages in the run-up to the financial crisis.

It was considered the largest of a string of legacy issues that the bank – which is still 62% owned by the UK Government – is starting to put to rest a decade on from its bailout in 2008.

RBS will report its earnings on Friday October 26.

The bank enjoyed a bumper set of earnings a year earlier, when it took no additional charges to cover payment protection insurance (PPI).

Some analysts are now pointing to a PPI provision of around £34 million.

PPI claims have ramped up following a Financial Conduct Authority advertising campaign featuring Arnold Schwarzenegger as part of an effort to encourage people to come forward before an August 2019 deadline for final claims.

However, Ian Gordon, an analyst at Investec, does not expect Lloyds to book further PPI charges in the third quarter.

However, he is forecasting some charges around exceptional items, “most likely in relation to our assumptions around restructuring costs and non-PPI conduct issues”.

Barclays will report its own third quarter results on Wednesday, October 24.

When stripped of litigation and conduct costs, third quarter pre-tax profit at Barclays is set to come in at around £1.3 billion.

Credit impairment charges and other provisions are forecast to hit £510 million.

UBS analysts have warned that investors will be keeping a close eye on how Barclays is managing its investment versus cost controls.

Barclays said costs were expected to grow 3% in the second half of the year, a move which UBS said was “a disappointment to us given completion of ring-fencing and shrinking restructuring.”

But if topline growth misses expectations in the third quarter, UBS says “investors will want to see cost discipline not investment plans.”

Consensus figures are pointing to total income, net of insurance claims, of £5.1 billion.