Preacher Choudary is ‘pathetic groomer’ of others, says ex-police chief

Radical preacher Anjem Choudary has been labelled a "pathetic groomer" following his release from prison.

The 51-year-old, who was locked up in 2016 after being convicted of inviting support for the Islamic State terror group, was taken from Belmarsh high security jail in south-east London early on Friday morning.

A former head of counter-terror policing insisted Choudary is not "some sort of evil genius". 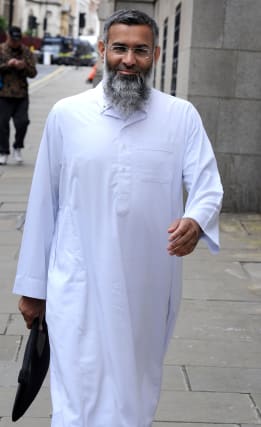 Sir Mark Rowley, who retired from policing earlier this year, told BBC Radio 4's Today programme: "It was a significant arrest and it was good to put him in prison.

"But I think we have to be careful not to overstate his significance.

"At the end of the day, he is a pathetic groomer of others.

"That is what he has done in the past. He is not some sort of evil genius we all need to be afraid of.

"We have to recognise that radicalisers look to generate a profile, they look to prey on the vulnerable.

"We need to be thoughtful about how we report their activity."

Choudary was due for automatic release after reaching the halfway point of a five-and-a-half-year sentence, when time spent on remand is taken into account.

Once a leading figure in the now-banned group al-Muhajiroun (ALM), the former solicitor had previously stayed on the right side of the law for years.

For the rest of the sentence period, he will be subject to a strict supervision regime.

Police and MI5 are expected to be among a host of agencies involved in monitoring him in the community.

Following his release, Choudary was photographed arriving at an address in north London.

It is thought he will initially be placed in a probation hostel and will have to comply with more than 20 licence conditions.

There are a number of standard requirements, including maintaining good behaviour, receiving visits from and keeping in contact with his supervising probation officer, and not travelling outside the UK without prior permission.

In addition, Choudary will be subject to a bespoke package of further measures while on licence.

These are expected to include: electronic tagging; a night-time curfew; requirements to stay within a set area and only attend pre-approved mosques; a ban on contacting individuals who he knows or believes to have been charged with or convicted of extremist-related offences without prior approval; and restrictions relating to internet use and mobile device ownership.

Choudary, from Ilford, east London, will be supervised under a system known as multi-agency public protection arrangements (Mappa).

In a separate measure, his name has been added to a UN sanctions list, which means he is subject to an assets freeze and travel ban.

On Thursday, Theresa May said authorities are equipped to supervise Choudary after his release.

From the 1990s, Choudary, a father-of-five, was a prominent figure in ALM, which also operated under a number of other names.

Over 20 years he voiced controversial views on Sharia law, while building up a following of thousands through social media, demonstrations and lectures around the world.

But despite being seen as a radicalising influence by police, Choudary largely managed to avoid falling foul of the law.

Following his conviction two years ago, it was reported that police had referred his activities to the Crown Prosecution Service on 10 occasions between 2002 and 2015, without charges being brought.

Michael Adebolajo, one of the murderers of Fusilier Lee Rigby, and Khuram Butt, the ringleader of the London Bridge terror attack, are among those previously linked to ALM.

There is no suggestion Choudary organised any attacks.