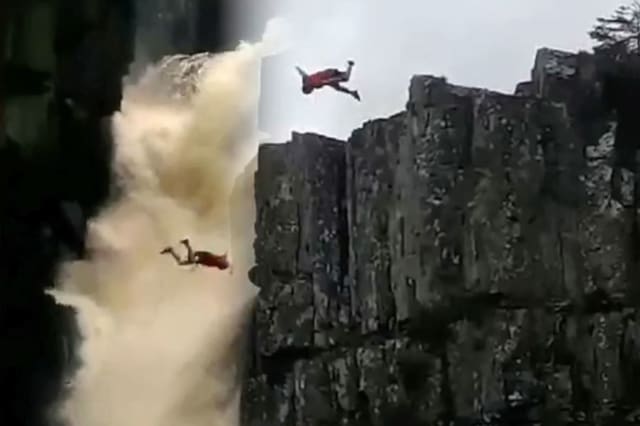 This shocking footage shows the jaw-dropping moment a cliff jumper "nearly died" after back-flipping from the top of Britain's most powerful waterfall.

Matty Harper, 25, flung himself 70ft from the top of the High Force waterfall, on the River Tees in County Durham, and into the turbulent waters below.

After blasting into the plunge pool he was held underwater by the powerful currents before emerging after several seconds, gasping for breath.

"I was definitely lucky to get out," the 25-year-old said afterwards.

According to SWNS, after considering safety with his friends, Harper decided to jump off the cliff with a move called the Tsukahara, where a front flip is turned into a backflip, mid-air.

He stuck the landing, but gave onlookers a scare after he remained submerged for a concerning length of time.

"I was held under for about seven to eight seconds and it was a real struggle to swim to the surface." Harper said about the experience.

"I thought I'd be okay where I jumped, I wasn't. I behaved recklessly, and am happy to be alive."

He went on to say that if anyone else was thinking about following his lead, don't. Which is certainly good advice!

Watch the original footage of the jump below: