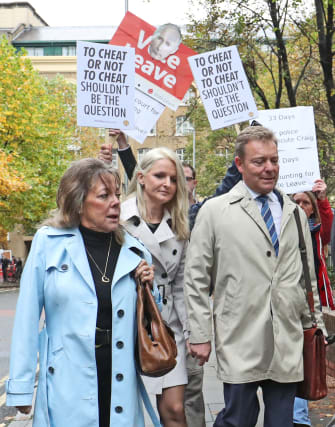 A Tory MP overspent on his 2015 general election campaign to beat then Ukip leader Nigel Farage in a bid to end his Parliamentary ambitions forever, a court has heard.

South Thanet MP Craig Mackinlay, 52, along with his election agent Nathan Gray, 29, and party activist Marion Little, 63, are alleged to have been complicit in submitting false expenditure declarations following his victory on May 7.

Southwark Crown Court heard the Conservative Party put extra resources into the campaign to win the Kent seat because prior to the EU referendum Ukip’s support was on the rise.

“Nigel Farage indicated he would step down as Ukip leader if he failed to win South Thanet so it was clear this was not going to be any ordinary election campaign,” prosecutor Aftab Jafferjee QC told jurors.

He said it became a “two-horse race” won by Mackinlay with a majority of around 2,800 in an electorate of 70,000, which Gray later described in an email to Little as a “truly magnificent election campaign”.

“Spending limits apply equally to every prospective Parliamentary candidate of every political hue across the UK and those limits seek to ensure integrity and public confidence in the most obvious example of this country’s democratic process, namely a general election,” the prosecutor continued.

He said expenditure is “tightly regulated” over two stages – a short and a long campaign – and it is the job of a Parliamentary candidate and their election agent to ensure limits are “scrupulously observed”.

Declarable expenses include the costs involved to get the candidate elected, such as printing of leaflets, putting up posters and staff costs, such as the employment of Gray as an election agent, Mr Jafferjee explained.

“Each of these three defendants were complicit in advancing those false declarations.”

He told jurors a signature purporting to be Nathan Gray’s in relation to the long return had been “forged”.

The court heard Little, along with a press officer, was sent from Conservative Campaign Headquarters (CCHQ) to stay in the Royal Harbour Hotel in Ramsgate, arriving on March 23, 2015.

The prosecutor told jurors they worked to get Mackinlay elected “from the moment they arrived”, while Little wrote an email in which she described herself as being “marooned” in South Thanet.

“Marion Little went onto effectively manage Craig Mackinlay’s election campaign so that he would be elected and Nigel Farage would be defeated,” he said.

“This was not just what is known as a marginal seat, but it was a contest which could see off Nigel Farage’s Parliamentary ambitions forever.”

The court heard Little told police she was not working for Mackinlay but carrying out national campaign work.

She now claims she went to Kent to prevent the election of Ukip and the benefit to Mackinlay was “collateral” to that, jurors were told.

But Mr Jafferjee said: “While we accept she may have been doing some things nationally, she was there for one purpose.”

The prosecutor said Mackinlay will blame his “lack of experience and unawareness” of what Little and others were doing.

Gray’s defence will similarly highlight his inexperience, stating he was “marginalised” by the arrival of Little, and that he has “no idea” how his forged signature came about, the court heard.

But Mr Jafferjee said: “It is the prosecution case each of these defendants involved themselves in a deliberate under-declaration and non-declaration of election expenses.”

Mackinlay, from Ramsgate, Kent, denies two charges of making a false election expenses declaration under the Representation of the People Act 1983.

Gray, of Hawkhurst, Kent, denies one charge of making a false election expenses declaration and a further charge of using a false instrument under the Forgery and Counterfeiting Act 1981.

Little, of Ware, Hertfordshire denies three counts of intentionally encouraging or assisting an offence under the Serious Crime Act 2007.

They are all on unconditional bail.

The trial, which is expected to last until December, continues.