Mundell ‘did not threaten to quit’ over Brexit deal 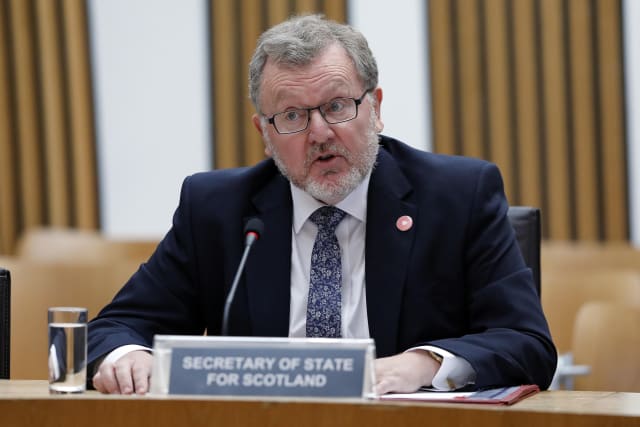 David Mundell has refuted allegations he told the Prime Minister he would quit the cabinet if a Brexit deal saw Northern Ireland split from the UK.

The Scottish Secretary had been rumoured to have made the ultimatum, alongside Scottish Conservative leader Ruth Davidson.

It was reported in the Sunday Times that the two made it clear they would resign if Northern Ireland faces new controls that separate it from the rest of the UK – because that could fuel the case for Scottish independence.

However, Mr Mundell has hit back at the allegations, claiming no such threat was made.

He told the BBC: “I haven’t threatened to resign.

“What I’ve said is that I regard the integrity of the United Kingdom as absolutely essential in these negotiations.

“We’re not going to prejudice the integrity of our United Kingdom and I’m very pleased – as you would see in yesterday’s statement – that the Prime Minister is absolutely behind that.”

The two senior Conservative politicians outlined their concerns over the question of the Irish border in a letter to Prime Minister Theresa May last week.

Both have insisted that, more than four years on from the referendum on Scottish independence, keeping the United Kingdom together is their top priority.

The letter states: “Having fought just four years ago to keep our country together, the integrity of our United Kingdom remains the single most important issue for us in these negotiations.

“Any deal that delivers a differentiated settlement for Northern Ireland beyond the differences that already exist on an all Ireland basis (eg agriculture), or can be brought under the provisions of the Belfast Agreement, would undermine the integrity of our UK internal market and this United Kingdom.”

It continues: “We could not support any deal that creates a border of any kind in the Irish Sea and undermines the Union or leads to Northern Ireland having a different relationship with the EU than the rest of the UK, beyond what currently exists.”