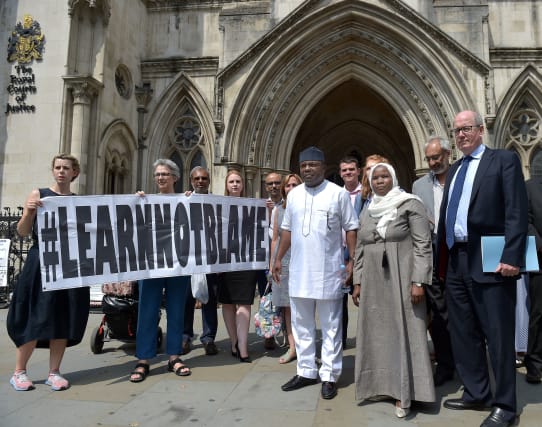 The medical regulator spent thousands of pounds trying to get a doctor permanently struck off even though she had been cleared to carry on working, it has emerged.

Hundreds of doctors signed a petition condemning the General Medical Council for using their fees to take legal action against Dr Hadiza Bawa-Garba.

The paediatric specialist was found guilty of gross negligence manslaughter in 2015 over the death of six-year-old Jack Adcock from sepsis at Leicester Royal Infirmary in 2011.

The GMC’s own Medical Practitioners Tribunal Service (MPTS) ruled in June last year that she should remain on the medical register despite her conviction, with a one-year suspension.

But the GMC took the case to the High Court to appeal against the sanction, saying it was “not sufficient”, and Dr Bawa-Garba was struck off in January.

She took her case to the Court of Appeal, and in August won her bid to be reinstated to the medical register.

A freedom of information request by the Press Association has revealed that the GMC spent almost £30,000 fighting the case.

The British Medical Association, which represents doctors, said it was “unacceptable” for the regulator to spend money challenging an initial decision.

The Society for Acute Medicine said the figures would “shock and further anger the medical profession”.

Many doctors said important issues raised by the case – including dangerous levels of understaffing, failures of IT systems and staff working in inappropriate conditions – had been ignored.

Hundreds signed a petition saying the fees they pay to the medical regulator should not have been used to fund the court case.

All doctors pay a fee to register with the GMC as well as an annual retention fee.

Figures obtained by the Press Association show the GMC’s legal fees in relation to the hearing before the High Court amounted to £11,974.75, and its costs in the Court of Appeal were £17,412.

Jeremy Hunt, who was health secretary at the time, ordered an urgent review to clarify the line between gross negligence manslaughter and human error for healthcare workers.

The review recommended that the GMC should have its right to appeal against fitness to practise decisions by the MPTS removed.

Dr Chaand Nagpaul, chairman of council at the British Medical Association, said: “The BMA has always maintained that the GMC should never have been given the right to appeal decisions of its own Medical Practitioners Tribunal Service (MPTS), a right that the Government has fittingly said it will lose in the future.

“So for the regulator – which is funded by doctors’ compulsory fees – to spend money on challenging the findings of the MPTS, causing extreme distress to Dr Bawa-Garba personally and the profession more widely, only for the initial decision to be reinstated at the Court of Appeal, is unacceptable.

“The GMC’s intervention sent shockwaves through the profession – it now has serious work to do if it is to regain the trust and confidence of doctors.”

Dr Nick Scriven, president of the Society of Acute Medicine, said: “This was a tragedy on several levels, not least the death of a young boy.

“The ongoing damage is that the medical profession has lost faith in our regulatory body and that the vital learning through sharing experience may not be the same again.

“These figures will shock and further anger the medical profession as the money will have been raised by doctors’ GMC subscriptions and was used in a way the majority of doctors opposed. We need the GMC to make a concerted effort to rebuild trust with its members.”

A GMC spokesman said: “We always strive to keep legal costs associated with fitness to practise issues to a minimum, for example by having an in-house legal team and so keeping any external fees as low as possible.

“As an independent regulator responsible for protecting patient safety we are frequently called upon to make difficult decisions in order to fulfil our legal responsibilities.

“We recognise the anger felt by many doctors about this case, but we take our responsibilities seriously and in fulfilling them we do all we can to keep our costs down.”

The figures come as GMC chief executive and registrar Charlie Massey and Sir Norman are due to appear before the Health Select Committee.

The MPs are taking evidence on patient safety and gross negligence in healthcare.