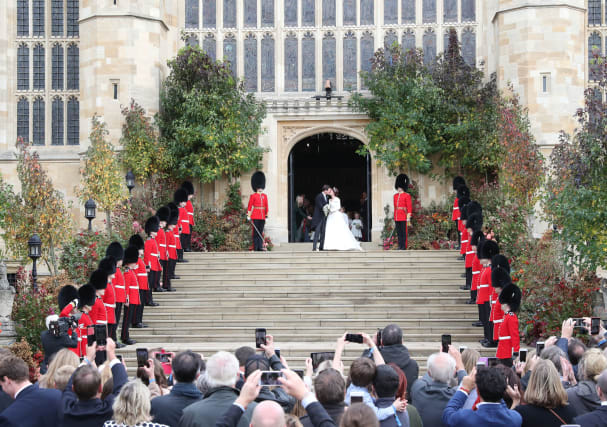 There was double joy as Princess Eugenie and Jack Brooksbank treated onlookers to two kisses on the steps of St George’s Chapel.

A jubilant crowd cheered the happy couple and waved small Union flags in the blustery conditions which saw the VIP guests holding on to their hats and one little pageboy take a tumble on his way in to the chapel.

Five months after the sun-drenched, much-anticipated kiss between the newly married Duke and Duchess of Sussex, the latest royal newlyweds showed their affection under a more cloudy sky in Windsor.

There were cheers as they kissed, as hoped, at the top of the steps, and further clapping when they shared another kiss halfway down.

Leaves blew off the autumnal trees decorating each side of the flower-lined staircase, and guests gathered in Horseshoe Cloister showed their concern, shouting “Oh” when pageboy Louis de Givenchy, six, appeared to lose his footing.

As with Harry and Meghan’s wedding, representatives from charities close to the newlyweds’ hearts were invited to take up prime spots for close-up views of the couple entering separately and leaving as husband and wife.

Opposite the West Door, on the neatly-kept lawn in Horseshoe Cloister, specially invited members of the public stood to cheer and clap the couple as they emerged, sporting beaming smiles.

Guests laid out picnic blankets and quaffed champagne, like those who went before them in the May sunshine, but Friday’s crowds donned long coats, had umbrellas at the ready and often had to fix their fascinators amid frequent gusts.

One member of the crowd was treated to a warm hug by the Duchess of York, who rushed to greet the family friend as she arrived, waving and smiling to the crowds, before going into the chapel.

There was an exclamation of “she looks stunning” when Princess Eugenie first arrived at the chapel, stepping out from the Queen’s Rolls-Royce Phantom VI car and revealed her long gown with its low-cut back.

The bride was hailed an “inspiration” by the father of a nine-year-old scoliosis sufferer, who is due to have a similar operation to correct the condition as Eugenie had when she was 12.

Unlike former television star Meghan, whose father, Thomas Markle, missed out on walking his daughter down the aisle after pulling out of the wedding with just days to go due to ill health, Eugenie’s father, the Duke of York, was proudly on hand.

Andrew carefully walked his youngest daughter up the steps, lined with roses, hydrangeas, dahlias and berries in warm autumnal colours, and even helped at one point to fix the train of her dress.

Onlookers were besotted with the bridesmaids and pageboys, including five-year-old future king Prince George and his three-year-old sister, Princess Charlotte, who returned to the chapel for their second royal wedding this year, following their starring roles at their uncle Harry’s nuptials.

There was an exclamation of “she looks so like him” as Robbie Williams’ daughter, Theodora, waved from one of the cars and many “awws” as the children departed.

With similar pomp and ceremony to this year’s first royal wedding, guardsmen lined the steps, pipes played and bells rang for the couple’s carriage departure from the castle as a newly married couple.