Some claimants will be worse off due to Universal Credit, Esther McVey confirms

Work and Pensions Secretary Esther McVey has confirmed that some people will be worse off as a result of the introduction of Universal Credit.

Ms McVey declined to confirm or deny reports she had told Cabinet colleagues that some claimants would lose out to the tune of £200 a month.

But challenged over a think-tank estimate that three million people will be about £1,800 a year worse-off due to the move to UC, Ms McVey told the BBC: "I have said we made tough decisions and some people will be worse off." 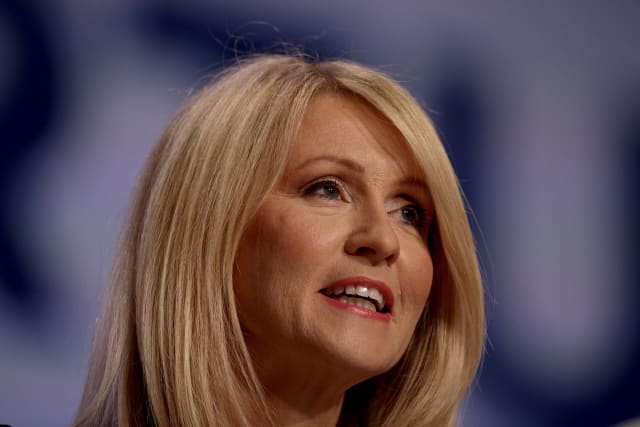 The Work and Pensions Secretary was speaking after former prime minister Sir John Major called for a rethink of the planned roll-out of UC to more than two million claimants of existing benefits, due to begin next July.

Sir John warned that the Government risks a poll tax-style backlash if its flagship welfare reform is seen as unfair.

The architect of the new system, former work and pensions secretary Iain Duncan Smith, said an additional £2 billion must be pumped into UC to make it operate as planned.

Universal Credit replaces a range of existing welfare payments, but has so far been applied only to new claimants or those with changed circumstances.

Conservative MP Nigel Mills urged ministers to slow down its introduction to millions of claimants of existing benefits until it has shown itself capable of making payments accurately and on time to those already receiving it.

"If you have any doubts that we can make it work for these volumes, let's slow down," the Amber Valley MP told BBC Radio 4's World At One.

"Let's not get this wrong for the sake of sticking to a timetable."

Mr Mills is a member of the Commons Work and Pensions Committee, which announced on Thursday that it was launching an inquiry into the further roll-out of UC, amid what chairman Frank Field said were "widespread concerns about the approach the Government is taking".

Another Tory backbencher, Johnny Mercer said that UC was "politically undeliverable" in his Devon constituency, and called for a planned increase in income tax thresholds to be scrapped in order to make the benefit more generous.

"Stop the tax-free allowance rise and re-invest into UC, or I can't support it," said Mr Mercer. "Not politically deliverable in Plymouth I'm afraid."

Ms McVey defended the new system, but did not deny reports that she had told Cabinet colleagues that some claimants could be as much as £200 a month worse-off.

"I won't say what I said in Cabinet," she told the BBC.

"I had a very open conversation with my colleagues about how to support people."

Ms McVey said that one million disabled people would be better off on UC.

Reductions in benefits would in many cases be the result of claimants increasing their income by taking on more work, she said.

Shadow chancellor John McDonnell said at the weekend that UC "will have to go", and a senior Labour spokesman described it as "a system which isn't delivering and needs to be scrapped".

Speaking during a visit to Bristol, Mr Corbyn said: "I think the system has to change dramatically and we will be proposing a more comprehensive system on this.

"Essentially our benchmarks will be that nobody should be worse-off and nobody should have their homes put at risk because of Universal Credit."

Sir John said he did not oppose the principle of UC, but thought there was " a real danger that it will be introduced too soon and in the wrong circumstances".

He told the BBC: "In order to introduce something like Universal Credit you need to look at those people who in the short term are going to lose, and protect them, or you will run into the sort of problems the Conservative Party ran into in the late 1980s."

Former prime minister Gordon Brown warned earlier this week of "chaos" akin to the rioting which greeted the poll tax in 1990, but Sir John insisted he was not predicting violence.

He said: "If you have people who face that degree of loss, that is not something the majority of the British population would think of as fair, and if people think you have removed yourself from fairness then you are in deep political trouble."

Mr Duncan Smith said that the UC rollout was "functioning very well", with tens of thousands of people finding it to be a better benefit than those it replaces.

But he told BBC Radio 4's Today programme that the money removed from its budget in 2015 should be restored: "We should direct the money back into Universal Credit exactly as it was originally planned to be rolled out."

Asked how much more needed to go in to the system, he replied: "The reality is the £2 billion that was taken out."

But a Government spokesman said: "Universal Credit is based on the sound principles that work should always pay and those who need support receive it.

"We are listening to concerns about achieving these principles, improving the benefit, and targeting support to the most vulnerable, including for around one million disabled people who will receive a higher award under Universal Credit.

"This is a far cry from the confusing, unreliable legacy system that failed to pay claimants their full entitlements and consigned people to a lifetime on benefits."